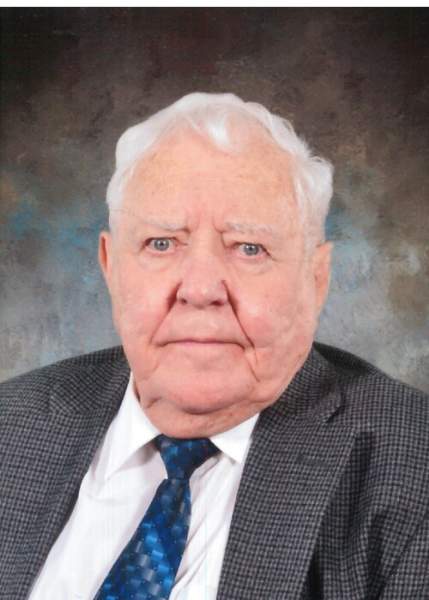 Bob Storey, 91, of Cheyenne, left his home and passed away peacefully on February 13, 2022, in Cheyenne.

He was born July 14, 1930, in Cheyenne to John R. Emmett, Sr and Rose Augustine Martinec-Storey. He married the absolute love of his life, Jean Schick, on April 6, 1952, in Cheyenne. He was a member of many organizations and clubs during his life. He particularly enjoyed being a member of Kiwanis Club, Wyoming Association of Municipalities, Board of Realtors, the Wrinkle Club (breakfast group), and was on the Public Relation Committee for Cheyenne Frontier Days. While in college, he was also a member of the Alpha Tau Omega Fraternity.

Bob was born into the long-standing pioneer family, The Storeys. The Railroad brought William Storey and his brother to Cheyenne, where they quickly embraced Cheyenne as more than just home. William Storey, Sr served on LCSD#1 Board for over 24 years. Storey Gymnasium was named for him. He was the conductor on the train that took President Roosevelt’s party to Laramie, Wyoming. Bob's father, Emmett, was a County Assessor and ran chute 9 for Cheyenne Frontier Days. Bob's uncle, Ed Storey, was on LCSD#1 Board and was credited for saving CFD during the great depression. The Storey boys were original Heel's members of CFD including Bob’s father Emmett. Storey Boulevard is also named for this same family.  Bob also cherished his mother’s side of the family, Martinec. His mother and her family emigrated from the Czech Republic where they came to Cheyenne to work on the Railroad.

Bob’s father, Emmett, passed away when he was 14-year-old. Bob then worked-on ranches in the summer and often talked about working at the Experimental Farm in the greenhouses. His numerous uncles on both sides of the family helped to father him after his father passed. Bob graduated with his class from Cheyenne High School in 1948. Out of that class, Bob had over 14 Best Friends who were friends for life.  He was an only child and all 14 of those friends became more like brothers.  He then attended the University of Wyoming, where he graduated with a bachelor's degree in Business. He worked for the Walton Ford Motor Company in Laramie, Wyoming, and was a member of the Wyoming Army National Guard while going to school.  He attended one year of Law School but had to leave when his wife became ill. When he returned to Cheyenne, he became the substitute teacher office coordinator for Laramie County School District #1, which he did in the early morning hours. He obtained a job with the Wyoming Highway Department and then went on to the Wyoming Game and Fish as a land appraiser. He was then recruited by Upland Industries (a subsidiary of UPRR) to be their appraiser/land specialist. Pretty much any piece of land in Wyoming Bob Storey sold or bought for the UP. He knew every inch of Wyoming like the back of his hand. After retirement, he started Bob Storey Realty, appraised/sold commercial and land properties, and went into business with his childhood best friend, Jim and together they formed Petry-Storey Lobbyist Group.

Like his father and grandfather, Bob was civic-minded.  He was elected to two terms on the Cheyenne City Council and was the Council President in 1984.   He ran for County Commissioner two times but was never elected. Bob loved Cheyenne. The UP moved him to Omaha, Nebraska, to be close to headquarters. Bob and his family made long-lasting friends there, but ultimately, Bob requested he be transferred back to Cheyenne, his beloved home. In his advanced years, Bob still wondered what was going on in Cheyenne and always wanted to drive around town and see the growth and reminisce.

He was preceded in death by his parents, all the Storey first cousins, and his countless best buddies from the class of 1948.

When he turned 90, he wanted to have a gathering. COVID hit, and we were unable to do that. In honoring him, the family would like friends to share written memories, experiences, and fun times with Bob. Please send these to Lynn Huylar at 7216 Heritage Dr., Cheyenne, WY 82009.

Visitation will be Wednesday and Thursday 5:00-7:00 p.m.  in the Lakeview Chapel at Schrader, Aragon and Jacoby Funeral Home, with the family receiving friends on Thursday. A private family interment will take place in Olivet Cemetery.

Honorary pallbearers will be his class friends from the graduating class of 1948 from Cheyenne High School.

To order memorial trees or send flowers to the family in memory of Bob Storey, please visit our flower store.