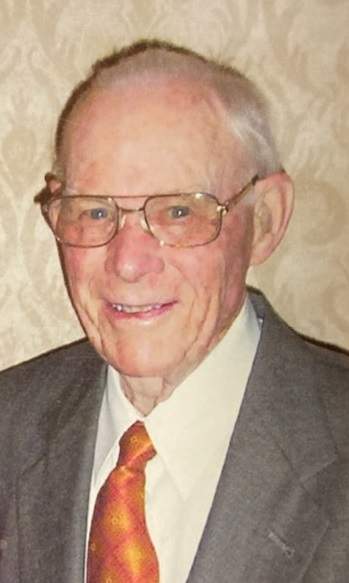 The wild and precious life of John “Jack” Bishop Burns

The poet Mary Oliver asks, “What is it you plan to do with your one wild and precious life?”

After 103 and a half beautiful years, it’s clear that Jack Burns’ answer was…

John (Jack) Bishop Burns was born on January 21, 1919, in Lander, Wyoming. He spent his young childhood in Lander and Riverton, filling his curious brain, surviving pneumonia, and bonding with his horse Chief—which sounded like Cheese when he said it through missing front teeth. In high school, his family moved to Cheyenne where, eventually, he’d plant roots that would grow into a family of 42.

Jack began pursuit of his dental degree at the University of Nebraska in Lincoln. One February, a friend dragged Jack along to a Valentine’s Day dance with the promise of a setup with a pretty girl. That pretty girl’s name was Lora. Jack was called away to serve our country in the Army during World War II, and while he was gone, Jack and Lora kept a long-distance relationship going. Then, before a weekend leave in Texas, Jack called Lora to see if she’d like to ask for some time off from nursing school. As he told it, he said he wondered if she might like to drive to Texas and marry him. She said she thought that sounded like a good idea. They were married in a Texas courthouse with a few of Jack’s Army friends as witnesses, then spent the next 65 years together until Lora passed away in 2007.

After Jack graduated from dental school, he and Lora settled in Cheyenne. They had six children; Jack, Bobbie (who died as a baby), Pat, Jeri, Jean, and Jim. Jack began his dental practice and served the community for more than three decades before retiring from dentistry in 1984. He and Lora were longtime members of St. Christopher’s Episcopal Church.

Jack lived with gusto. Over the years, he enjoyed water skiing, golfing, traveling, hunting, fishing, spending time with family and friends, Friday night dances with Lora, protecting his raspberry crop from hungry birds, making gorgeous stained-glass pieces in his basement workshop, challenging anyone to a game of cribbage, relaxing with his dog, cheering on the Wyoming Cowboys, being a social butterfly, and drinking his nightly glass of Scotch, which he poured every day at 4:59 p.m.

Jack is survived by five children, 11 grandchildren, 22 great-grandchildren, and two great-great grandchildren, as well as his loyal lab, Chloe. He is welcomed in heaven by his parents, Earl and Lilas Burns; his sisters, Eleanor Kincheloe and Margaret Brainerd; and Lora, who we like to think was waiting for him on the dance floor, wondering what the heck took him so long.

Jack was a kind and generous man, and an inspiration to his family, neighbors, friends, and community. He was the very definition of class, with a warm and wonderful sense of humor and a laugh no one who knew him will soon forget. He knew the value of making time for those you love. In living according to what you feel is right and good. In standing up for what you believe in. And in drinking good scotch, because as Jack knew, even if it lasts 103 and a half years, this wild and precious life is too short to drink swill.

To order memorial trees or send flowers to the family in memory of John Burns, please visit our flower store.