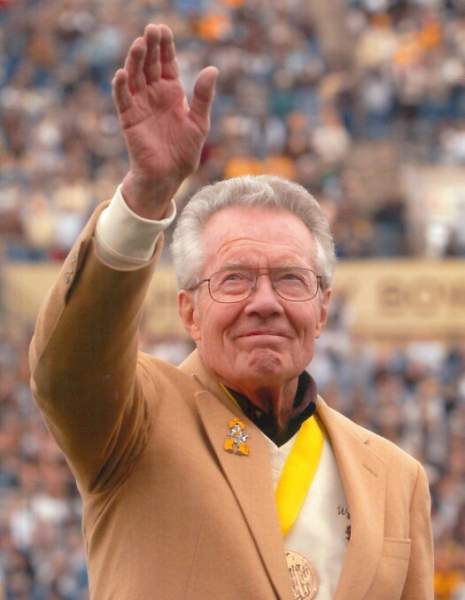 John Carroll Clay, 98, of Cheyenne, Wyoming passed away in Cheyenne on Saturday, August 7, 2021.

His passion for helping others evolved from pivotal points in his life, from growing up poor on the family ranch west of Laramie during the Great Depression, to later flying a P-47 Thunderbolt fighter plane in Europe during World War II.

As a high school senior, John left the ranch and began a part-time bank job earning $65 per month.  He attended the University of Wyoming but his studies were interrupted by the war and he enlisted in the United Sates Army Air Forces.  Stationed outside Sacramento, California, he met his future wife, Esther.  Shortly after marriage, he left for Europe and arrived just days after the invasion of Normandy in June 1944.  In 11 months of combat, he flew his fighter bomber on 68 missions included navigating a jagged frontline to fight the Germans in the Battle of the Bulge.  At war’s end, he returned home to his new bride and the couple moved to Laramie so John could finish school with a G.I. Bill grant.

His plans changed and accepted an opportunity to work with Wyoming Farm Bureau selling automotive and fire insurance from 1948 to 1960.  In 1960, the couple moved to Cheyenne and John accepted a position with Bosworth Sullivan.  Through five different decades and several name changes, John finished his career as president and financial consultant with RBC Wealth Management, all the while becoming a philanthropic force with his wife.

John is survived by his daughter, Carroll VanDuyn of Cheyenne; four grandchildren; and two great-grandchildren with one on the way.

He is preceded in death by his parents; his loving wife, Esther; a daughter, Diane Wooster; and three brothers, Harold, James and Perry.

A memorial service will be celebrated on Tuesday, August 17, 2021 at 2:00 p.m. at St. Mark’s Episcopal Church with a reception to follow at the Clay Pathfinder building on Laramie County Community College campus. Cremation is under the care of Schrader, Aragon and Jacoby Funeral Home.

John placed an importance on helping others achieve their goals while pursuing his own.   With this in mind, he and his wife established many scholarships at the Laramie County Community College.  In lieu of flowers, donations may be made to these scholarship funds or to a charity of one’s choice.

To order memorial trees or send flowers to the family in memory of John Clay, please visit our flower store.