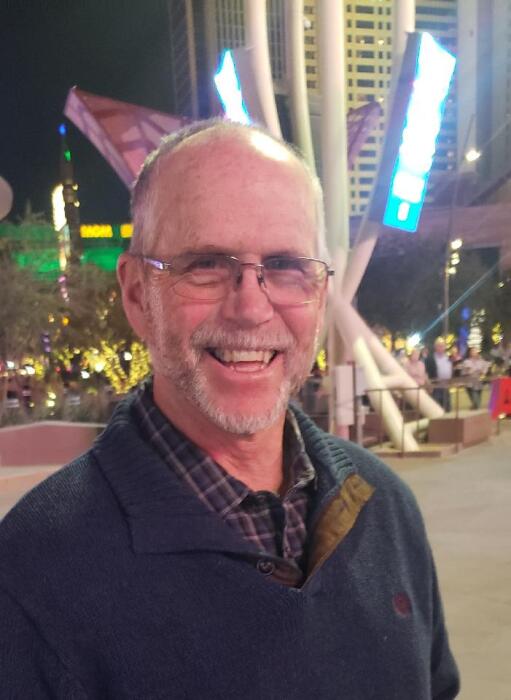 Kerry Preston Seid lost his battle to Cholangiocarcinoma on March 15, 2022. He was preceded in death by his father William “Bill” Seid, is father in-law Gerald “Jerry” Cahill, Uncle Eldon and Aunt Leola Wilson. He was survived by his mother, Delores (Dee) Seid, his wife, Denise, his children, Christopher (Jessica), Aurora (Duard III), Sarah (Chris), and Justin (Natasha), 13 grandchildren, and aunts, uncles, and cousins.

Kerry was born to William and Delores Seid on November 12, 1955. Kerry was born in Worland Wyoming, graduated from Natrona County High School, and the University of Wyoming. Kerry was able to visit many places in the United States, as a result of being a son to a Navy Sailor. Of those places, Hawaii was Kerry’s favorite. Despite all the travels, he remained a faithful resident and fan of Wyoming. Go Pokes!

On July 3rd, 1993, Kerry and Denise married in Cheyenne and the two joined their families. Together they shared in raising four children, Christopher Seid (Jessica Fiscus), Aurora Seid (Duard III) Dilday, Sarah Urbanek (Christopher Anderson), and Justin (Natasha) Urbanek. The two joined families were just the beginning of a family that would grow to include spouses and grandkids who loved Kerry deeply.

During his life he encouraged adventures and was not afraid to try new things. Although, his journey was short, his life was full. Kerry had a love for sports. He was a participant in football, hockey, and softball. He later became an umpire but knew all the rules and regulations of EVERY sport. His enthusiasm for softball grew in his children’s lives, making a “family team”, a summer lifelong tradition. He inherited many nicknames like, Stu, Red, Coach, and Double “O.” His passions were poker, trivia, and his pets, but “lake life” was his life. He slalom skied to Jimmy Buffet through the summers. Another great passion of Kerry’s was photography. He loved to capture weddings, sports, events, birthdays, and holidays for everybody’s memories.

Later came memories that he was most passionate about, his grandchildren.  Austin Humphrey was his first grandson, giving him the proud title of Papa. Later came Connor Moyer, Karsen Urbanek, Fionna Seid, Sasha and Kai Dilday, Dameon Fiscus, Owen, Noah, Isabel, and Lorelai Anderson, Anna Rose, and Ellie Pierce. Papa was proud and loved each of his grandkids so much. He treasured memories at the lake, the movies, and having sleepovers.

We know Kerry will be coaching 3rd base, waiting to wave everybody home. Rest easy Papa Kerry!

To order memorial trees or send flowers to the family in memory of Kerry Seid, please visit our flower store.