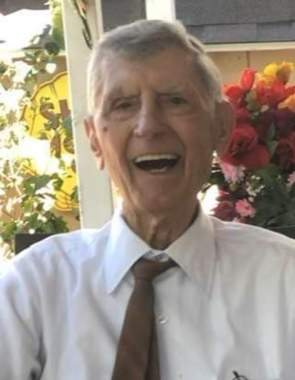 Adam Breaux age 91 of Cheyenne, WY passed from natural causes to his eternal home on May 18, 2022, surrounded by loving family.  He was born October 5, 1930, to Cladis Breaux and Ozite Trahan in Kaplan, Louisiana, and graduated from Kaplan High School in 1947.  He enlisted in the Air Force the same year eager to follow his brothers Jean and Ivan into the military and served 30 years in the Air Force Retiring in 1977, as an E9. He was an Electrical Engineer who during his career worked on B32s, and B52s, as a radar technician. He later worked as a systems troubleshooter on the Minuteman Missiles at Francis E Warren Air Force Base.

He met Pat, the love of his life in 1951 in Rapid City, South Dakota and they married June 1952 making this their 70th year of marriage. They enjoyed being together through all seasons of life. Every anniversary, Adam would play their song and Pat would wake up to “Because of You,” sung by Tony Bennett.  Just a few weeks prior to his death he asked if he could sing a song in French (his first language) to her and of course she said yes. She told me that it was one of the sweetest gifts that he ever gave her!

He loved his family and showed his love in many ways, taking them fishing, giving them school lessons from algebra to homework, woodworking and handcrafting loving works of handmade gifts from birdhouses to doing brickwork, wiring basements, plumbing, and fixing everything! He was a kind and loving husband, father, and grandfather. He will be missed more than words can express.

A private family celebration of life will be held in his honor.

To order memorial trees or send flowers to the family in memory of Adam Breaux, please visit our flower store.