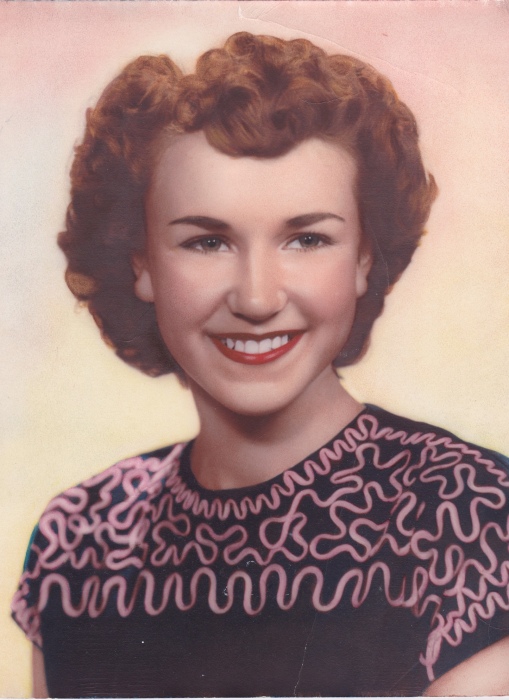 Anita Ruth Johnson-Vogel, of Hereford, Colorado, was born October 26, 1931 in Macksville, Kansas.  She passed peacefully at Granite Rehabilitation and Wellness in Cheyenne, Wyoming on July 24, 2020 at the age of 88.

There was no one  tougher and no one prouder of their family than Anita.  Toughness was ingrained nearly at birth.  Born into the Great Depression, Anita was the eldest daughter of LeRoy and Hazel Fuqua.  Her parents, brother Don, sisters Barbara and Phyllis (Jeanie) made the perilous and dirty trip from Kansas to Edgewater, Colorado in a Whippet automobile.  Anita fell ill on the trip with what was later diagnosed as one of, or even possibly the first case of polio in the state of Colorado.  Anita was quickly quarantined in a Denver hospital and recovered with few lingering effects.

Anita and her siblings lived and attended school in rural Edgewater, Colorado.  Anita, a natural artist, was trained in the art of colorizing photographs at the Emily Griffith School of Art in Downtown Denver.  Her natural affinity for painting followed her throughout  her life, and was heavily sought after during her tenure at the Heath Studios in Denver.

Anita met the boy next door and future husband, Carl, at an early age.  They were married on June 1, 1950 and were blessed with four children: Rodney, Rhonda, Barbara, and Tamara.  Carl and Anita left Edgewater in order to start their own family dairy in Loveland, Colorado and spent many happy years there.  In 1979 they were struck with the urge to move again to the ranch in Hereford, Colorado.  Together they raised children and grandchildren, dairy and beef cattle, a few horses, a pig and a goat, and enough hay to feed them all.  Anita always kept an immaculate house, a large garden, and a beautiful yard.  Everyone was always welcome to visit and many did just to sample the fresh garden wares, a glass of fresh milk, and some of her fresh fried chicken.

No one was ever prouder of their family than Anita.  She loved each member of her immediate and her extended family with an undeniable fervor.  You were always welcome in her home, and she loved to entertain and visit.  One could often find her on the phone, writing letters and cards, and traveling to visit friends and family.  She was especially enamored by her grandchildren, and her great-grandchildren, and spent much time with them all.

Anita lost her husband, Carl, in 2007.  Her tenacity was certainly tested by grief and she mourned like no other.  Fate stepped in a couple of years later and Anita met and married second husband, Charles Vogel.  Charlie gave Anita many, many things, but one of the greatest gifts was that of travel.  They spent their years together traveling to every corner of the country visiting family and friends and exploring new places.  They traveled together until Charlie’s death in 2014.

Along with her huge amount of heart, that ingrained toughness would again show itself several times throughout her life.  She endured each and every tragedy with an amazing amount of grace.  In 1995 she suffered a near fatal aneurysm. Once again, against all odds, she recovered with few lasting effects.

Later in life she lost two husbands, a son, nieces and nephews, a brother and sister, brothers and sisters-in-law, countless friends and acquaintances, and she grieved heavily for each but always had the strength to smile and persevere.

Anita was preceded in death by her parents; brother, Don; sister, Phyllis (Jeanie); husbands, Carl and Charles; and son, Rod.

Anita loved all and was loved by all.

Her family will celebrate her life at a later date.  Cremation is under the care of Schrader, Aragon and Jacoby Funeral Home.

To order memorial trees or send flowers to the family in memory of Anita Johnson-Vogel, please visit our flower store.