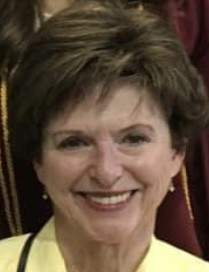 On Wednesday, December 9, 2020, Barbara Jean Galeotos (Gardner) passed away at the age of 84 in her home in Cheyenne, Wyoming after an amazing life full of family, friends, hardships, triumphs, and most of all, love.

Barbara was born on December 20, 1935 in Roseau, Minnesota.  When she was young, her father joined the Navy during World War II and was sent to San Diego for basic training.  Wanting to be closer to him, Barbara and her mother moved to California where they rented out a single room in a mansion in Hollywood.  During the war, her father was stationed in Hawaii, so she and her mother moved to San Francisco where they resided for three years.  Every Friday night she and her mother went to a movie, and that is where her love for movies started.  After the war, her father returned to work for the Union Pacific Railroad in Cheyenne eventually retiring as the yardmaster.

At a young age she was one of thousands of children affected by polio, and she recovered strong and determined, character traits she kept her entire life. She attended Clark Elementary, Johnson Junior High, and Cheyenne High School.  While in high school she worked at Newberry’s and remembered serving Lawrence Welk thirty cents worth of orange slices when he was in town promoting a record during Cheyenne Frontier Days.  She graduated in 1953 and got engaged to the love of her life, John Galeotos, and they married on April 28, 1957.  She and John then moved to Laramie where John completed his degree and she worked for Dr. Jack Alford, professor and golf coach, at the University of Wyoming.  Barbara and John returned to Cheyenne and raised two children, a daughter, Cheryl, and a son, John.  Barbara worked for the legislature from 1969 to 1997.

As much as Barbara liked fashion, she probably spent all her earnings on her work wardrobe. She sold real estate briefly for Wallick and Volk and Ed Murray and Sons and volunteered for 4-H teaching cooking classes. In 1996 she was diagnosed with Multiple Sclerosis, an affliction she met head on never letting it define what she could and could not do. Later in life, Barbara attended LCCC and received an associate degree in Anthropology to further her understanding of the human story and to provide context to their travels to places as far as Ireland, Italy, England, Greece, and her lifetime desire to travel to Egypt and stand in the kings’ burial chamber of the Great Pyramid of Giza, which she did. Her travels also took her much closer to home just over the hill to Laramie to watch the Pokes play.   She and John were season tickets holders for UW football and basketball for over 50 years and traveled to many bowl games and basketball tournaments.  She enjoyed spending time with her grandchildren and traveling to watch them participate in their sporting events, musicals, and other various activities.

Barbara and John had a home in Scottsdale, Arizona where they lived during the winter months and had season tickets to the Colorado Rockies spring training games.  Barbara loved to play bridge with her friends, read, spend time at their cabin in Centennial, golf, and watch movies and sports.

Barbara was preceded in death by her parents, Marion and Elmer Gardner.  She is survived by her husband, John, of 63 years; her children, Cheryl Johnson (TJ) of Laramie, and their children Tommy and Alexandra, and her son, John Galeotos (Peggy) of Colorado Springs and their daughter, Molly; and many in-laws, nephews; and a niece.

Barbara has requested cremation and a private family service which will be planned later.

To order memorial trees or send flowers to the family in memory of Barbara Galeotos, please visit our flower store.