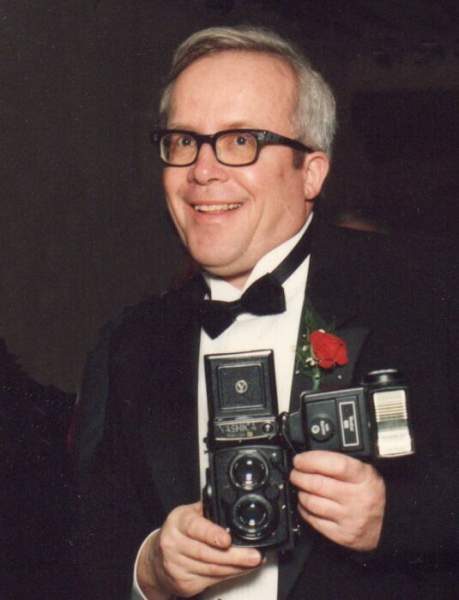 Donald Raymond Meyer, 81, longtime resident of Kimball, NE passed away on July 29, 2020 in Cheyenne, Wyoming.  Don was born April 30, 1939 in Chippewa Falls, WI to Raymond and Sarah (Monson) Meyer and grew up in various cities in at least six states due to Ray’s career assignments with the Civil Aeronautics Administration.

He graduated from the University of Colorado, Boulder with BA and MA degrees in biology with a minor in chemistry.  In August 1962, he began his 41 year science, photography, glassblowing (and more!) teaching career at Kimball County High School. Soon after his arrival in Kimball he was drawn to the second year home economics teacher, Carol Lore. In the months after the couple’s first date in October at the local roller skating rink students entertained themselves by driving by to check out the late night lights in home ec and biology rooms. Don and Carol were married on May 26, 1963 beginning their 57 year partnership in countless hobbies and creative endeavors.

Thus began a partnership of intense learning, teaching, and serious “play.” To create an engaging biology classroom that was full of life, the couple cared for an extraordinary classroom menagerie with many animals over the years: Brandy, the mynah bird; Oscar, a rosy boa; Pierre, the squirrel monkey; Mickey and Al E. Gator, the alligators; Julius Squeezer (I & II), the red tailed boas, as well as more typical classroom pets such as fish, lizards and a hamster that enjoyed rolling through halls of the school in his hamster ball.

A summer scientific glassblowing class enabled Don to create glassware he needed for the chemistry labs. But then he branched out into other blown and spun glass creations: ships, barometer birds, swan vases, animal figurines. Carol became an accomplished glassblower as well, and selling their wares became an extra source of income. Meanwhile, Don began a course to teach high school students how to blow glass.

The purchase of a 35mm camera was the trigger for the next “hobby.” Don’s developing photography skills led to more camera purchases and photographic explorations, which led to requests to film a wedding, and then to more portraits and weddings. A photography business was born, and a photography class was added to Don’s slate at Kimball County High School.

Summers provided an opportunity for additional education and hobbies.  Gardening took on a life of its own. Growing many seedlings under lights provided a well rounded landscape to be used as backgrounds for photography adventures. Rocketry was added to the spare time adventures. In addition to shooting off rockets at school, Don and Carol enjoyed attending and participating in rocket meets in Northern Colorado.

At the end of his teaching career his class offerings included Advanced Biology, Basic and Advanced Chemistry, Psychology, Glassblowing and Photography.  After keeping up with all this, new diversions were needed upon retirement in 2003.  So started the new hobby of decorating the house for the July 4 holiday as well as for Halloween and Christmas.  The light displays are no more, but they and the garden in its full glory live on in videos at Don and Carol’s Youtube channel https://www.youtube.com/user/kimbnebritelites

Don loved his family, career and hobbies; and most of all loved teaching his students and family how to learn and to work hard for their community and causes.

This extraordinary man is survived by his amazing wife, Carol (Lore) Meyer, three children, Scott Meyer (Janell) of Windsor, CO, Stephanie Geuns-Meyer (Hans) of Medford, MA and Suzanne Norton (Tanner) of Cheyenne, WY; two siblings, Margaret Knosher (Harlan) of Galesburg, IL and William Meyer (Sara Ann) of Alexis, IL; grandchildren, Robert, Jonathan and Elizabeth Meyer and Ella, Tesla and Walter Norton. Other survivors include 2 brothers-in-law and their wives: Merle and Linda Lore of Alliance NE and Glen and Dianne Lore of Lincoln, NE.  He was preceded in death by his parents and in-laws, Ira and Anna Lore of Alliance, NE and several members of Carol’s immediate family.

Cremation has taken place. To honor Don’s wishes, a memorial service will not be held. Look for a post-pandemic celebration-of-life to coincide with a future KCHS all-school reunion; probably involving fireworks/rockets/canon; and most definitely black powder. Memorial donations may be made to, Kimball School Foundation, 901 South Nadine Street, Kimball, NE  69145 or a charity of choice.

To order memorial trees or send flowers to the family in memory of Donald Meyer, please visit our flower store.