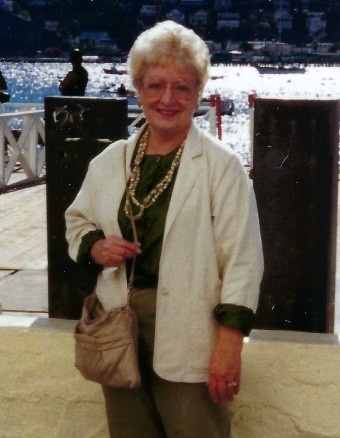 Doris married Earnest D. Watkins on February 11, 1951. Together they had three children, Richard L. Watkins (b: 11-12-1955), Stephen Lynn Watkins (b: 7-24-1957) and Sandra Kay Watkins (b: 7-4-1960). Being a young family, work took priority. However, mom and dad always prioritized trips for the family to explore Wyoming, Montana and South Dakota.  Ernie accepted positions to maintain ICBMs in Roswell, New Mexico on two separate occasions. As often as possible we visited White Sands, Carlsbad Caverns, The Painted Desert, Goddard Rocket Museum, or just spent a day out hunting for arrowheads or the occasional shard of pottery. Ernie Watkins passed February 17, 1970.

After 12 years of being a single working mother, Doris married Alfred Risha on November 11, 1982. All of her children were so excited for mom. Doris and Al spent ten great years traveling throughout the country, including many trips to Hawaii and multiple cruises. We heard often about the amazing sights, food, and fun friends they would meet. During branding season, Doris made amazing meals she brought to Al’s farm for the workers. The food was the highlight for the ranch hands. Alfred passed away April 19, 1993.

During the succeeding time with Ernie and Al, Doris worked as a commercial teller for what is now ANB Bank. She interacted with key businesspeople as well as legislators from around the state. Doris loved to host parties for the American National Bank staff. Twice a year Doris would host a Summer Fiesta and a Winter Fiesta. Doris was quite expert at mastering Mexican cooking. Those events were highlights for the those invited.

Late in the 1980s, Doris moved to state government in which she worked for the Wyoming Travel Commission. Doris ended her career with the state in the mid-1990s. Doris lived comfortably at the same home she and Ernie bought in 1962. Doris relocated to Whispering Chase in 2013 where she resided until the end. Doris was a wonderful wife, mother, friend and host. She will be deeply missed.

Visitation will be held on Monday, February 7, 2022 from 5:00 p.m. to 7:00 p.m. at Schrader, Aragon and Jacoby Funeral Home.  A private graveside service with her family and friends is scheduled for the next day.

Arrangements are under the care of Schrader, Aragon and Jacoby Funeral Home, 2222 Russell Ave, Cheyenne, Wyoming 82001.

To order memorial trees or send flowers to the family in memory of Doris Risha, please visit our flower store.