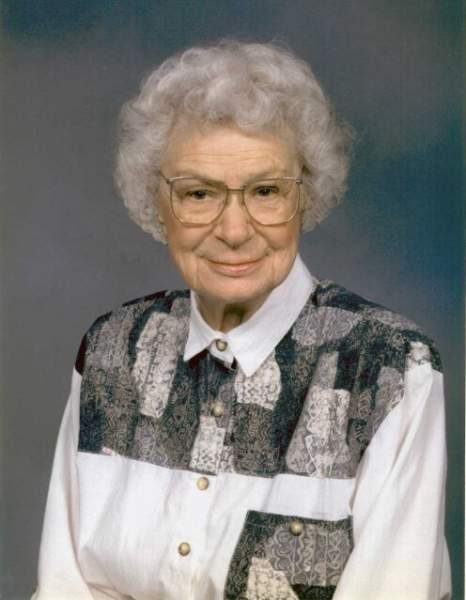 Dorothy K. Baker died April 4, 2021 in Cheyenne, Wyoming. She was born in Richmond, Indiana, on May 22, 1919, to Walter and Harriet (McMullen) Knollenberg and grew up on the family ranch near Crowheart, Wyoming.

Dorothy graduated from the University of Wyoming. She married Dale Baker of Laramie, Wyoming, on December 27, 1941. During the years of World War II she was employed in the personnel office of United Airlines in Cheyenne. Dorothy and Dale had one daughter, Anita.

In 1948 the family moved along with the United Airlines Maintenance Base to the San Francisco Bay Area. They lived in San Carlos, California, where Dorothy was a homemaker and community worker. She was active in PTA, served as guardian for her daughter’s Camp Fire Girl group, and taught Sunday school. She was talented at crafts, sewing most of her own and many of her daughter’s clothes and being proficient in embroidery, stenciling and Japanese brush painting. She and Dale enjoyed travel both within the US and to Germany, Czechoslovakia and Australia to visit family.

After her husband's death in 1988, Dorothy returned to Cheyenne and made her home at Pointe Frontier. She was a member of First United Methodist Church in Cheyenne.

Dorothy is survived by her daughter, Anita Cervenak, of Torrington, Wyoming (Ed Verplancke); nephews, Wesley (Kathy) and Eric (Marilynn) Knollenberg; and three great-nieces; and a great-nephew. She was predeceased by her sister Gertrude Peterson of Cheyenne and her brother George Knollenberg of Mechanicsville, Virginia.

There will be no public services, at her request. Cremation is under the care of Schrader, Aragon and Jacoby Funeral Home, located at 2222 Russell Avenue, Cheyenne, WY, 82001.

To order memorial trees or send flowers to the family in memory of Dorothy Baker, please visit our flower store.