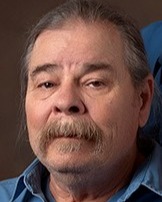 Earl Robert Hursman of Cheyenne, passed away on  January 19, 2023 in Cheyenne WY.

He was born on May 28, 1949 in Geneseo IL; son of Jim and Vera Hursman.  He graduated from Geneseo JD Darnall Sr. High School in 1967 and attended Blackhawk College in Moline.

Earl had worked at Illini Beef Packers in Joslin IL, at Illini Hospital in Silvis IL, and most recently he retired from the Cheyenne VA Hospital in  January 2019.

Earl enjoyed spending his time in the outdoors fishing, boating, hunting, and snowmobiling. Earl was an avid reader. He loved his horse “Bear.” Earl was a gifted storyteller and was everyone’s friend, no one was ever a stranger.

Memorials may be made to the Cheyenne VA Voluntary Services in Earl’s name for their Homeless program:

To order memorial trees or send flowers to the family in memory of Earl Robert Hursman, please visit our flower store.