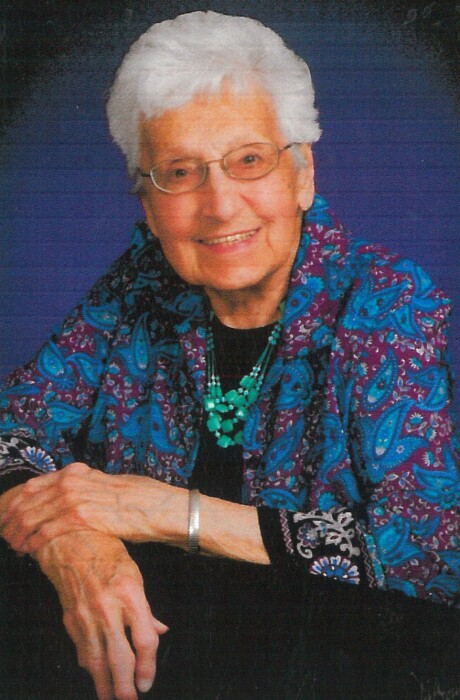 She married Rodney Hanson in 1943 at Christ Lutheran Church in Detroit, Michigan. They lived in California while he was in the United States Navy, then in Michigan and moved to Cheyenne in 1949.

She was employed by the former Memorial Hospital for 30 years, with 19 years as Director of the Medical Record Department, retiring in 1988.  In later years, she was an active volunteer at the Cheyenne Regional Medical Center.

She was a lifelong Lutheran, with membership at St. Paul’s Lutheran Church since 1949 where she served in many capacities as President of the Church Council, Sunday School Superintendent, member of the choir and many of the church committees.

She served as board member of Meals-on-Wheels, Wyoming Senior Citizens, Inc., Zonta Club of Cheyenne, and Friendship Force of Cheyenne.  She had a lifelong love of gardening, meeting people from around the world and learning about their culture.   She collected egg cups from many of her travels.   She also enjoyed the Arts, reading, walks in Lions Park, and her cabin near Fox Park.   She encouraged educational goals for her family and thoughtfulness for others.

She was preceded in death by her parents, Paul and Margaret Zetye; husband, Rodney; daughter, Priscilla Berwick; and brothers, Walter, Louis, Robert and Carl Zetye.

A memorial service will be held Thursday, April 8, 2021 at 2:00 p.m. at St. Paul’s Lutheran Church with interment in Cheyenne Memorial Gardens following the service.

Memorials may be given to St. Paul’s Lutheran Church or Cheyenne Botanic Gardens.

To order memorial trees or send flowers to the family in memory of Eleanor Hanson, please visit our flower store.