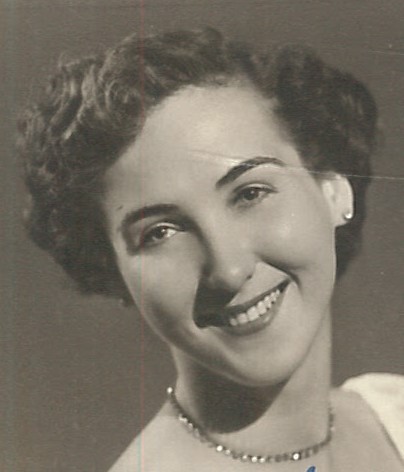 She attended Liberty Elementary and Van Sickle Junior High School.  During the summers, she worked at the tobacco farms in Connecticut. Upon graduation from Commerce High School, she was inspired by her cousin Lena, who was in the Coast Guard, to enlist in the Air Force in 1951.  After completion of basic training at Lackland AFB, she went to Chanute AFB for parachute rigging school and the 3345th Air Base Group.  Next was a tour at Westover AFB and the 814th Air Base Group. In a pioneering move for women at the time, she went to officer candidate school in 1958 and met the love of her life (Wally) Deines.  They married in September 1958 stationed at McGuire AFB. Regulations at the time forced her to retire when her only son Steven, was born on May 1st, 1960.

After deployments to Adair, Keesler, F.E.Warren and Offutt AFB, Wally retired in 1972.

Both were employed at the Naval Research Laboratory (NRL) in Washington DC.  Wally suddenly passed away Jan 19, 1976, at age 44.  This forced her to become the breadwinner of the family. To occupy her mind during this tough time in her life, she got her pilots license in a Cessna 150 and soloed over 20 hours.

Upon leaving NRL in 1977, she worked at the Department of Commerce NOAA branch and assisted with the development of a consolidated airport directory for the southeast US. In 1980 she worked at INSCOM Arlington Hall, VA in the intelligence field.

In 1984 she worked at the NSA as a test director acting as liaison between contractor installation teams and site personnel.  In 1987 she worked at the National Security Operations Center (NSOC) as a NATO desk officer. She went back to the NSA in 1988 as an integrated logistics support manager and later as a communications desk officer.  In 1997 she worked with ManTech International and moved to Yorkshire England as a configuration management analyst. She returned to the US in Sept 2001 as an independent contractor performing security clearance background investigations.  She continued this work in Cheyenne until her retirement in 2006.

She was an avid reader and loved to cook, her specialty was baklava.  She enjoyed her sports cars, all with a stick shift. She loved classical music and listened on internet radio classic FM out of London.

Emily will be interned with her husband at Arlington National Cemetery in the near future.

To order memorial trees or send flowers to the family in memory of Emily Deines, please visit our flower store.