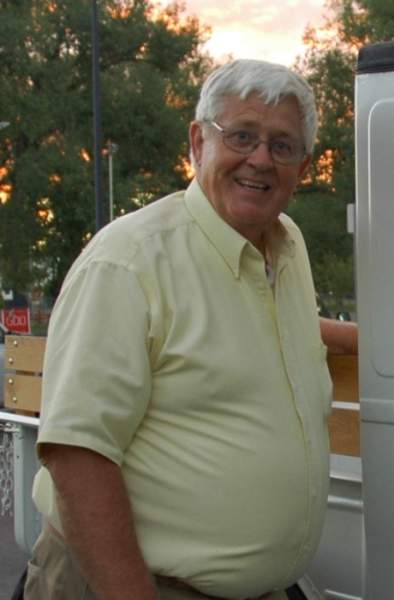 Gene was born on June 17, 1944, in Gothenburg, Nebraska to Gerald and Ina Slack and his three older siblings, Dean, Ron, and Donna.  Later, Gary arrived and completed the family.

Gene attended a one room schoolhouse through 8th grade.  He attended Gothenburg High School and then Cozad High School, where he received his diploma.  He loved learning and figuring out how to fix everything on the family farm.  Gene started his career with the Union Pacific Railroad working as a plumber on stationary equipment, prior to 1972.  In 1977, he moved to Cheyenne, where he began working as an engineer until he retired.

Gene had two wonderful daughters, Charity, born in 1976 and Amy, born in 1979.  He loved tickling them, going for ice cream, and traveling with his daughters.

He enjoyed mentorship and helping children with their 4-H projects and anything else they may have wanted to learn.  He was honored with several mentoring awards for his work with the youth of Cheyenne.  Recently he enjoyed serving through the Senior Center and finding ways to support the older community in Cheyenne.

Gene was the epitome of a life-long learner by trying new hobbies all the time.  He was constantly trying a new adventure and loved researching to learn about his new found hobby and sharing his learning with others.  He often had a project to do with his grandchildren to teach them a new skill.

He loved spending time with friends in the great outdoors with his many hunting and fishing expeditions.  He enjoyed taking trips to new places to camp, hunt, and fish and would stop to see friends and family along the way.  Later in life he began his love of classic car restoration.  He traveled all over the country to find the parts and cars he wanted to work to restore.  He loved sharing rides in his cars with others.

He was preceded in death by his parents, Gerald and Ina Slack; his brothers, Ron and Gary Slack; brother-in-law, John Hazen; and granddaughter, Elizabeth LaBrie.

Visitation will be held on Monday, December 14, 2020 from 4:00 p.m. to 6:00 p.m. at the Schrader, Aragon and Jacoby Funeral Home.  A funeral service will be conducted on Tuesday, December 15th at 1:00 p.m. at the Lakeview Chapel at Schrader, Aragon and Jacoby Funeral Home.  Interment will be held in Gothenburg, Nebraska at a later date.

As we celebrate the life of our father, we would love to hear the stories and memories that you have of him.  Please email them to clabrie@gips.org or dajacobsen3@gmail.com.  Thank you for sharing some special parts of his life with us.

To order memorial trees or send flowers to the family in memory of Eugene "Gene" Slack, please visit our flower store.