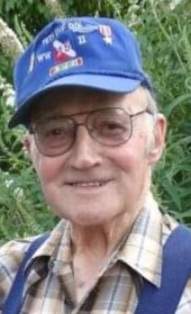 Frank Zavorka, 96, went to his heavenly home at 11:00 p.m. on May 10, 2022. Although he has lived in Glendale, AZ for the last 10 years, he always remained a Wyomingite at heart, having spent the majority of his life in WY. He was born September 21, 1925, in Valparaiso, NE, to Alois and Antonie Zavorka. His family farmed around Yoder and Hawk Springs, Wyoming. As a first-generation American, Frank learned the value of honesty and hard work from his parents, who were naturalized as American citizens, having fled communism in Czechoslovakia at the ages of 16 and 14.

Bravery runs in the Zavorka veins. Frank was drafted into WWII by the Army at the age of 17 years old. He spent three years on the frontlines in the European theater for the 75th Infantry – also known as the “diaper division” because all the soldiers were so young. Frank made headlines when war correspondents dubbed him the “Wyoming Cowboy” for being the first infantryman to “jump the Rhine River.” He spent 40 days and nights at sub-zero temperatures in the Ardennes forest during the Battle of the Bulge. He was even left for dead by his company after being thrown by artillery. When he regained consciousness an unknown amount of time later, Frank chiseled himself out of the frozen mud with his bayonet and then walked until he rejoined the American troops. Out of 300 men from his company, Frank was one of the 24 that survived the Bulge. Frank helped liberate towns and concentration camps, fighting the Axis forces through France, Belgium, Luxemburg, and Germany – having quite literally “walked across Europe.” Frank credits the Grace of God with his survival. Frank was one to never give up and to always do the right thing. He had earned the rank of Staff Sergeant and was recognized as an expert sharpshooter, for taking out an enemy machine gun nest single-handedly. He received the Bronze Star, Combat Infantry Badge, the American Theater Ribbon, the EAMET Ribbon, the Good Conduct Medal, and the Victory Ribbon.

After his honorable discharge, Frank returned home to WY. His bravery and independence continued when he challenged the family’s arrangements and, instead, married the love of his life, Ruth Lanik. Together, they started farming in the Big Horn Basin and had four children – Ben, twins, Jeane & Janet, and Dan. Over the years, Frank and family lived in various parts of Wyoming – mainly, Basin, Powell, and Heart Mountain. Frank loved being a farmer, and grandsons, Ken & Keith enjoyed summers helping their grandpa on the farm. Frank also worked as an ice delivery driver, a field man, at the Bentonite plant in the winter months, and served as a police officer for the town of Greybull, WY. Once their children had left home, Frank and Ruth semi-retired to Torrington, to be close to his brothers and sisters. Frank worked as a handyman for Golden Manor well into his 70s. Later, they moved to Cheyenne, living near son, Ben and daughter, Jeane. In Cheyenne, Frank and Ruth enjoyed gardening together. They both had excellent green thumbs – whether that be top beet growers or beautiful gardens! Frank also worked on many do-it-yourself projects around the house. While Ruth had been a painter, Frank was creative in his own right, skilled with wood-working and metal-craft – he made scarecrows out of metal parts of garden tools and built beautiful wooden windmills and wishing wells for people’s yards. Ruth and Frank were proud Christians, regularly attending church and hosting Bible studies in their home.

Not long after celebrating their 60th wedding anniversary in 2006, Ruth was called home to Jesus on Feb 15, 2007. Frank spent the next 15 years doing what he did best – persevering and moving onward. In 2008, he participated in the National Honor Flight to Washington, DC. In 2012, he moved to Arizona with daughter, Jeane and granddaughter, Kelsi. The lower altitude proved much better for Frank’s health, so that he was no longer worrying about falling on the ice and even stopped using his inhaler every day. Jeane, Frank, and Kelsi saw the Grand Canyon, and visited historic Tombstone, AZ, as well as the Jerome, AZ gold mine. They had previously gone to Yellowstone and Mount Rushmore together – making sure to stop at every Veteran memorial along the way. While in AZ, they also made a trip to the California coast to see the ocean – a first for Kelsi, and something Frank hadn’t seen in many years.

Frank was never one to sit still. He knew the value of work and always seemed to feel like he had to be doing something, but he could also sit back and enjoy a movie and popcorn, or a game of Domino’s. Like any good Czech, he also had a (somewhat unexplained) fondness for Pinochle and yodeling. And he never turned down ice cream.

Frank was proud to be a WWII veteran and honored to have served his country well. He was a loving father to his four children and grandfather to his 14 grandchildren – along with having several great-grandchildren and even great-great-grandchildren. He was a lifetime member of the VFW and American Legion, a supporter of Right to Life, and in Cheyenne he enjoyed weekly coffee meetings with other vets and Church-members. Frank was a good and faithful servant to his Lord and Savior, Jesus Christ, and was a light of love and joy to all who knew him. Even though his war injured legs, knees, and feet plagued him his entire life, Frank never failed to kneel at his bedside to pray well into his 90s.

Services to celebrate Frank’s amazing life will be Friday, May 20, 2022. Visitation at Schrader, Aragon, & Jacoby Funeral Home 2222 Russell Ave, Cheyenne at noon, followed by a service with full military honors. Reception afterward at Church of Christ. Please join us in saying farewell to Frank, who “fought the good fight, finished the race,” and who now has his mansion in heaven – which, assuredly, is the biggest and most plentiful farm and garden he could have ever imagined.

To order memorial trees or send flowers to the family in memory of Frank Zavorka, please visit our flower store.