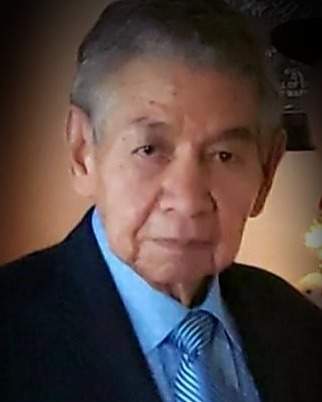 Gilbert I. “Gil” Valdez of Cheyenne, Wyoming passed from his earthly life on September 10, 2022 surrounded at his home by his loving family.  He was born October 7, 1933 in Monte Vista, Colorado to Isaac and Aurelia (Dupont) Valdez.  He was 88 years old.

Gil graduated from Del Norte High School in Del Norte, Colorado in 1950.  In 1952, he enlisted in the United States Air Force and was stationed in Scotland as an intercept radio operator throughout his enlistment, which ended in 1956.  While there, he met and later married Rosemary Wilson in 1957.  Their children, Karen, Stuart, Yvonne and Andrea were the most blessed addition to their marriage.

In 1965, Gil received his business degree along with a commission in the Air Force from Colorado State College in Greeley, Colorado, a long-awaited goal from his early high school days.  He became a navigator with later assignments at Head Quarters United Nations Command in South Korea, Head Quarters Recruiting Service in San Antonio, Texas, Commander Recruiting Detachment in Louisville, Kentucky, and Commander Special Activity Detachment (NORA) in North Bay, Ontario, Canada.  Major Valdez retired from F.E. Warren AFB in December 1981.  He and Rosemary divorced in 1979.  She tragically died in a car accident in 1984.

Gil enjoyed many interests and sports was at the top of his list.  The Denver Broncos and Golden State Warriors were a must watch.  He dabbled in golf but never took it very seriously.  He was a life-time member of the VFW, DAV, Fraternal Order of Eagles, American Legion Post #6, and AMVETS, but his main enjoyment was being with JoAnn, his precious lady and dancing partner. They traveled to Europe, including the Isle of Capri and Monaco, Mexico, Grand Cayman, and Puerto Rico.  COVID 19 put a screeching halt to visiting other places.  In later years, they say, shopping and casinos become less complimentary but by no means less expensive.

Gil was a kind and humble man, quiet but determined, and grateful.  He leaves his loving daughters, Karen (David), Yvonne (David) and Andrea (Jim); and the best son a dad could have, Stuart, all of Cheyenne. He is also survived by nine grandchildren; 15 great-grandchildren; brothers, Jake and Ernest; and sister, Delma.  He leaves a love for his precious lady, JoAnn, that will never end; he says, even in death.

He is preceded in death by his parents; his brother, Arthur and sister-in-law, Angie; sister, Ernestine and brother-in-law, Eugene; sister-in-law, Mary Alice; and granddaughter, Shayla, a very unpleasant experience for him.

His presence will be missed.  Visitation will be held on Wednesday, September 14, 2022 from 4:00 p.m. until the Vigil for the Deceased at 6:30 p.m. at the Lakeview Chapel at Schrader, Aragon and Jacoby Funeral Home. A Funeral Liturgy will be celebrated on Thursday, September 15th at 10:00 a.m. at St. Mary’s Cathedral with interment to follow at Cheyenne National Cemetery.

To order memorial trees or send flowers to the family in memory of Gilbert I. "Gil" Valdez, please visit our flower store.