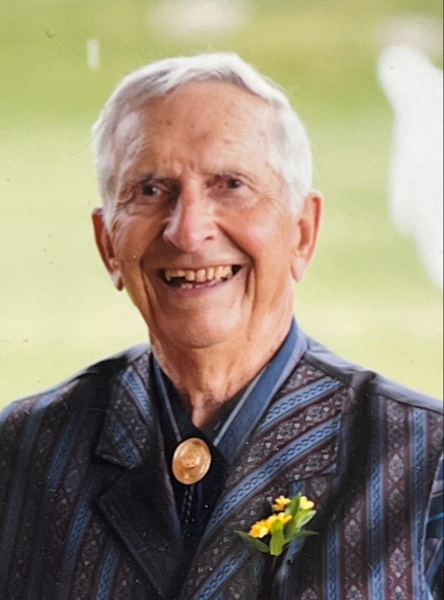 Harry Lee Scutt lived 91 years (and five days)!  He was born in East Liverpool Ohio and raised in Sherman, NY, where he enjoyed winter sports and summer baseball.  He commented that the fun-loving antics of his childhood would not be smiled upon today! Harry went to college and played baseball at Ohio State University, where his ‘dormitory’ was located inside the walls of the football stadium.  He earned a Petroleum Engineering degree, saying “he liked some classes so well he took them twice” and met his life-long love, Dorothy.   Dot and Harry married and started a family.  After serving two years in the Air Force at a remote radar station in Pennsylvania, they moved west.  The west and the oil business would be their home for the rest of their lives. They lived in many towns across Wyoming – including an oil field camp, where three young daughters walked oil pipelines and the fourth stayed bundled in a snowsuit – and then on to Colorado where they became avid horse lovers. Trail rides with Dorothy and being with neighbors and family who loved horses was one of Harry’s favorite things.  Once, after being bucked from his horse twice, he staggered around the corral ready to get back on saying, “He can’t get away with that!” He took up calf roping in his sixties and was an expert at single action shooting.

Harry loved his family. He made each of his four daughters feel special, and he adored his wife of 69 years.  He had enduring friendships too, including his college buddy Tucker, his trapshooting groups, and his cribbage pals. Harry’s very (very) dry sense of humor, his stubborn pride, and his learned humility made him one-of-a-kind. Harry is survived by his wife, his brother-in-law and sister-in-law, four daughters, four sons-in-law, nine grandchildren, and 12 great grandchildren. He was preceded in death by his parents and one grandson.  In his words, “the beat goes on,” yet for us the cadence is very different.  We will celebrate Harry’s life with banjo music and John Phillip Sousa marches (that could bring a tear to his eye) on Saturday, August 20, 2022, at the Sherman Hills covered shelter at Curt Gowdy State Park from noon to 4pm.

To order memorial trees or send flowers to the family in memory of Harry L. Scutt, please visit our flower store.