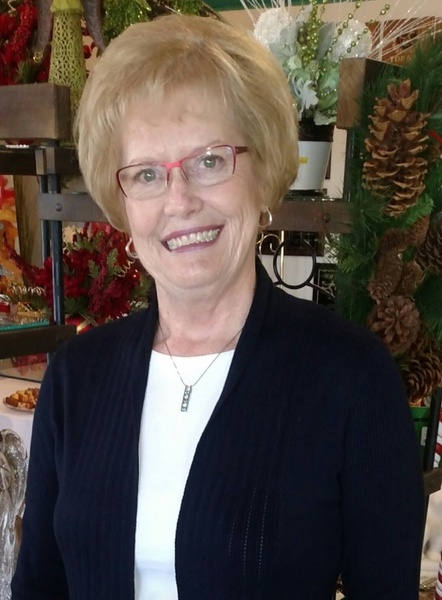 Jane Yvonne Eickbush, 75, passed away from difficulties with Dementia on February 5, 2022.

Jane was the owner of Bouquets Unlimited from 1982-2019.  She had a passion for flowers and people.  She will be remembered for her kind natured heart, leadership, and her impressionable smile and laughter.  Jane was a pillar in our community and a big part of so many lives for so long.  She also had a passion for the Kiwanis Club in which she joined February 1st, 1990, sponsored in by her dad, John Cook.  She was a member for 32 years and had 19 years of perfect attendance.  She served as the 3rd female President in 2000 and honored as Life Member in 2008.  She was co-chair and helped raise over $100,000 to eliminate maternal neonatal tetanus worldwide.  She served as Club Secretary, pancake breakfast chairman (and made a heck of a bloody mary), Clambake Chairman and served and chaired many committees.  Jane was also a sorority sister of the Beta Sigma Phi since 1965.  She was also a member of the Greater Cheyenne Chamber of Commerce being on the Chamber Board of Directors (1992-1994) and was a part of the Red-Carpet Committee for many years including being the Chairman of 1995 Chamber of Commerce.  Additionally, Jane was part of the Military Affairs committee (MAC) and took part in various excursions including a trip to Camp Guernsey, as well as a trip to Biloxi, Mississippi in a C130.  She even got to go down in the missile silos twice and check out the control rooms.  In addition to being the Small Business of the Year recipient in 1991, she is also an Alumni of Leadership Cheyenne. Jane also served on many other community-based programs that included LCCC Enterprise Center Board and the Cheyenne Botanical Gardens.   Jane was also a member of the First United Methodist Church.

Jane will be missed by many but mostly by her family that loved her so much!

Services will be Sunday, February 20, 2022 at 2:00 p.m. in the Lakeview Chapel at Schrader, Aragon and Jacoby Funeral Home.

To order memorial trees or send flowers to the family in memory of Jane Eickbush, please visit our flower store.