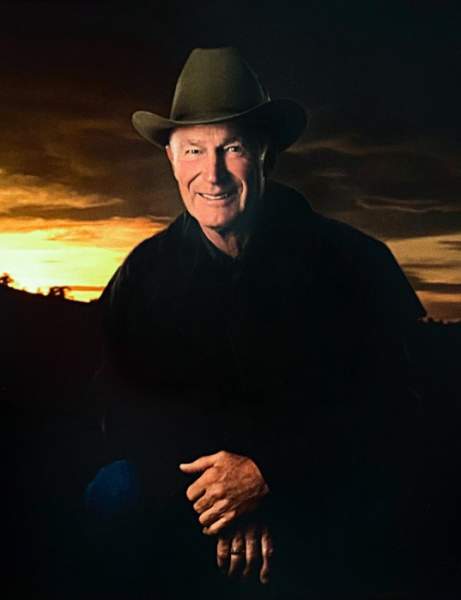 September 28, 2021 the World lost a loving father, grandfather, brother, friend and amazing Veterinarian, Jay Dee Fox, DVM, age 77, passed with his children at his side.  Born to Eldon & Katherine (Semroska) Fox in Newhall, CA on June 24, 1944 equipped with boots, spurs and so much charisma it could hardly be contained!

Jay Dee’s love of animals and ranch life was cultivated on the Fox Family Ranch in Harrison, NE, where he also perfected the Sioux County Swing - for those lucky enough to be his dance partner. His rodeo skills earned him all-around accolades as a Cornhusker rodeo team member during his pre-vet studies and furthered his education at prestigious Colorado State University Veterinary program. He joined Farmhouse Fraternity where he was known as “FOXY” by his classmates, they say he was a terrible cook but a wonderful friend. Jay Dee kept in close contact with his fellow classmates including the famous cowboy poet Baxter Black.

Jay Dee met Frances Fox, wife of 30 years, while serving his country in Walter Reed, MD.  He drove a fast silver convertible corvette and flew airplanes to swoon his Maryland bride. The Fox family set up residence in Cheyenne, WY where Jay Dee worked closely with, and eventually took over Dr. Cliff Bishop’s large animal veterinary practice.  Jay Dee followed his passion of taking care of his clients: human, equine and bovine alike, with expert care into his final days, as retirement was never an option in his mind.

Jay Dee served on the Board for American National Bank, was a longtime Veterinarian for Cheyenne Frontier Days and a HEEL. He also gained access to Plum Island to study foreign animal disease – forever a student and perfecting his relentless dedication to his practice and clients. He was happiest adventuring on horseback through the mountains, Squaretop Mountain in the Green River Lakes and the Cloud Peak Wilderness were among his favorites!

Donations can be sent to PETA – or the Democratic PARTY – JUST KIDDING!!!! Ha!!!  NRA – Republican Party – or just do something incredibly kind and generous, just like Jay Dee did during his lifetime.

To order memorial trees or send flowers to the family in memory of Jay Dee Fox, please visit our flower store.