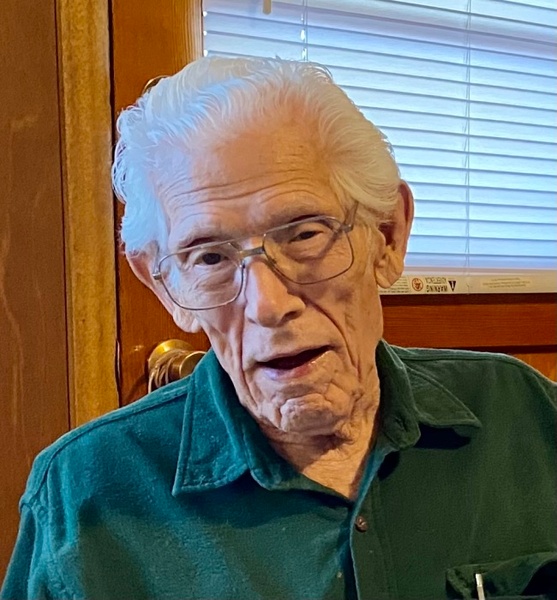 Jerome “Frank” Meade, 92, passed away May 1st  at home surrounded by loved ones.

Born 1929 on the family homestead in Broadus, Montana, he grew up riding a horse to school and running with the boys of the Crow Reservation. Late in the Depression, they moved to Raymond, Washington where at 14 he worked as a river log roller.

A few years later the family returned to Montana where he discovered a lifelong passion of bee keeping.  In 1948 he enlisted in the Army Air Corp, today’s Air Force, which brought him to Fort Warren in Cheyenne on the last train into town during the blizzard of 1949.

Frank married Kathleen Schumacher in 1952. The couple had two children. He was predeceased by his wife Kathleen in 2011, and his son Jerry in 2019. Survived by daughter Judi, husband Stan McGee, two grandsons Jeremy and Josey, eight great grandchildren, and his companion of eight years, Marian Lafollette.

Frank retired from Cheyenne Light Fuel and Power, 1985. Frank and Kathleen spent the next 24 years traveling the world by ocean freighter. Frank was past president, caretaker and board member of the Orchard Valley Water Company from 1954 until his death.

Military Honors Ceremony will be held at the Cheyenne National Cemetery Friday, May 20 at 11:00 a.m. Visitors asked to arrive by 10:45.  In lieu of flowers, please consider a donation in his name to Cheyenne Meals on Wheels where Frank and Kathleen volunteered for nearly 20 years.

To order memorial trees or send flowers to the family in memory of Jerome Meade, Jr., please visit our flower store.