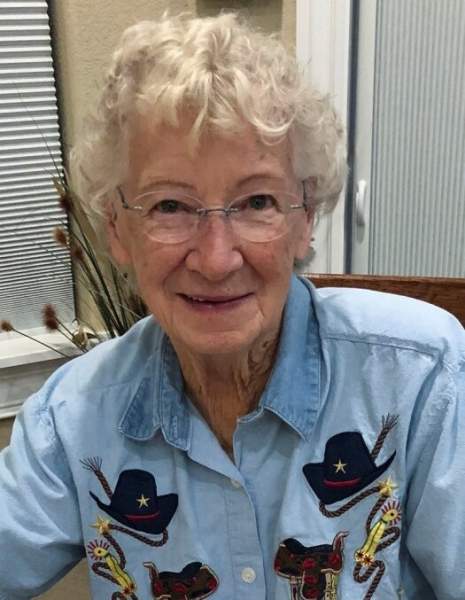 Jewell Maxine Stetson Shanley, 91, died October 1, 2021, at home surrounded by family in Cheyenne, Wyoming.  Jewell, born September 14, 1930, in Crawford, Nebraska to the late Orville and Anna Soester Stetson, grew up in Crawford where her great-grandparents were early settlers. Raised in a family that farmed, ranched and lived on their ancestral Stetson homestead, she embraced, lived and dressed western. Jewell lived her parents’ teachings of working before playing and valuing family and friends whether it was to simply gather or to share in good times or in bad. Wherever life took her, Western Nebraska was always home, and she visited often.

Jewell’s family came first, but she also enjoyed music, dancing, traveling and visiting with friends and family. She attended Dawes County, Nebraska schools from 1935 to 1947, where part of those years she rode horseback to attend. Upon earning her teaching certificate from Chadron College at age 16, Jewell chose to teach country school because “it was a pretty good paying job.”  She recalled that during the blizzard of ’49 while teaching in Belmont, Nebraska “we had fun sliding out the second story schoolhouse windows.” After 3½ years of teaching, Jewell married and began raising a family. She returned to work in the Aurora Public Schools in Aurora, Colorado from 1969-1995. She worked various office positions at Peoria Elementary, Aurora Central High School, and Rangeview High School. Jewell enjoyed working for the schools because “it was a challenge, and each day was different.” She also enjoyed making “endless” friends in the schools.

Jewell met and tormented her future husband as a youngster in Crawford. Despite that, they dated when he returned from the 389th Army Air Corps in WWII. Jewell married Gene Shanley at St. John the Baptist Catholic Church in Crawford on February 24, 1951. They moved to Salt Lake City, Utah where Gene was a pilot, then immediately continued to Burlingame, California where Gene went to work for United Airlines in San Francisco. They transferred to Omaha, Nebraska on July 1, 1951. In May of 1953, they transferred to Denver which was closer to home. It was in Aurora that that they lived and retired after raising seven children and one grandson while welcoming troubled teens and young adults to stay when they were struggling. Their door was always open and good food was plentiful. Gene died May 2, 2019, in Aurora after they celebrated 68 years of marriage. Jewell has since resided with her daughter and son-in-law, Kris & Roy Kanter, in Cheyenne.

Jewell always preferred outside work, but when she married and started a family, Jewell taught herself to cook and became quite a seamstress designing and sewing clothing for her family along with creating quilts, sleeping bags, tents, and winter coats suitable for Colorado winters. Jewell was talented with crochet hooks and knitting needles, always sharing her bounty. She learned to play piano as a child and found it a means of relaxation throughout her life.

While supporting the careers of her husband and herself, Jewell also manned the home front making it look easy to lasso seven kids, their attitudes and many activities. Whenever possible she was alongside her children, grands, greats and great-greats at their church, community, school, sporting or scouting events. Although she didn’t like to get her face wet, swimming was a favorite family pastime. All seven children learned to swim and swam competitively. Jewell was also the “Kool-Aid Mom.” The neighborhood kids congregated to play at the "Shanley Corner" where Jewell provided snacks, advice and discipline. She was also known as the mom who couldn’t whistle, but did! Every kid in the neighborhood knew what that ‘non-whistle’ sounded like and was quick to let the Shanley kids know it was time to head for home. Jewell loved to share jokes making people laugh because she just couldn’t get the punch lines quite right.

Jewell and Gene traveled the states whenever possible visiting family and basking in the history, the scenery and the people they met. In the 1980’s Jewell became interested in genealogy with her daughter, Kris. They started with a 13 page family document that eventually grew into several books of 200 plus pages that they shared with family. Jewell felt genealogy was a puzzle to be solved and loved visiting cemeteries, libraries, museums, and history centers to learn more about her ancestors. She treasured friends and family she met along the genealogy trail.

Jewell was a lifetime member of the PTA, Girl Scouts and Stetson Kindred of America and a member and volunteer of the Catholic Church, Elks, Eagles, Royal Neighbors, League of Women Voters, Boys Scouts and United Way.

At Jewell’s request, no services will be held.  Jewell will be inurned with her husband, Gene Shanley, at Fort Logan National Cemetery, 4400 W Kenyon Ave, Denver, Colorado.

In lieu of flowers, Jewell requested memorials to the Comea Shelter, c/o Robin Bocanegra, 1504 Stinson Ave, Cheyenne, WY  82001 or to the donor’s choice. The Comea Shelter became dear to Jewell’s heart in the short time she lived in Cheyenne. Comea provides safe, secure emergency and transitional housing, meals, and case management for homeless men, women and children while collaborating with community programs and services to create opportunities for independent living.

For full obituary, photos and to leave condolences for the family: https://tributes.com/JewellShanley

To order memorial trees or send flowers to the family in memory of Jewell Shanley, please visit our flower store.