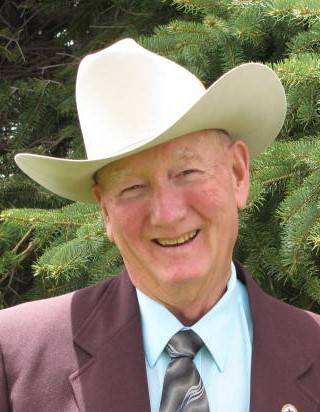 When someone you love becomes a memory, that memory becomes a treasure. Grandfathers have ears that truly listen, arms that always hold, love that’s never ending and a heart that’s made of pure gold. Grandfathers are put into our lives in order to make better sense of the universe. My grandfather, who I will introduce in a moment, was strong and supportive, stubborn and compassionate, always there to lend a hand (or an ear), was honest, loyal, respectable and admirable (just to name a very few). The dedication he showed in and to his family and his work on this earth shines through each of his descendants today. His life was a blessing, his memory now a treasure.  Grandpa, you are loved beyond words and missed beyond measure.

Today, it’s my honor to introduce you to John Leland Hayes, known to some as “Big John".

John Leland Hayes was born May 23, 1933 in Superior, Wyoming to Ishmael and Prudence Ethel (Dunn) Hayes. They lived in Rock Springs where his sisters attended and graduated from Rock Springs High.  They eventually divorced and each parent remarried. He lived with each parent and step-parent at least six months out of the year.  His mom and stepdad, Charles W. Melbourn, had a small homestead south of Medicine Bow.  Some of the happiest times he had were on the Lechie Ranch outside of Rock Springs. Here they would live a cowboy life and have those cowboy hard times.  Those times, however, would make for great story telling much later down the road.  He also spent time with his dad, stepmother, Louise Dudley, and his sister, Martha.

In 1951, John stepped away from the cowboy way of life and enlisted in the U.S. Navy.  He attended boot camp at San Diego Naval Station and was later stationed in Kodiak, Alaska.  He was eventually assigned to the USS Bradford DD (destroyer) 545 and participated in many areas of combat in the Korean War.  He was honorably discharged in 1954, and was distinguished with the Korean Service Medal, one Silver Star, the United Nations Service Medal, the National Defense Medal, the China Service Medal, the Korean Combat Medal, the Korean Presidential Unit Citation, and the Good Conduct Medal.

After being discharged, he moved back to Rock Springs but the ranch had been sold and no jobs were available.  He moved to Laramie, Wyoming where he worked for the University of Wyoming agronomy farm, and the Western Public Service Company while studying as an engineering student.  It was during this time he met his wife, Shirley Weinberger.  Family legend has it that John first saw Shirley at a dance where he was playing in the band.  He knew instantly he had to marry this dark haired, blue-eyed beauty, and after a whirlwind courtship, he indeed managed to convince her to marry him.

John and Shirley eloped to Kimball, Nebraska and were married in a ceremony attended by their best friend.  They returned to Laramie where their first child, John Lee, was born.  Following a change in jobs, the small family moved to Cheyenne to expand in both careers and family size.  Now working for Land Air, Inc,, Kristie and Blayne were born.  Eventually John worked for the Wyoming Highway Department and was a cartographic engineer for several years, retiring with 34 years of service.

He lived the life of a traditional American cowboy.  Brave, strong, compassionate and honest.  He spread The Word and kept The Word.  He gave his word and kept his word.  He was a man with a solid handshake and a helping hand.  He worked for God, family, country, and community.  He didn’t mind what he said, but he said what was on his mind and he was always as quick to forgive as he was to correct.  A story teller to friends and strangers alike, a follower of God and leader of his fellow man, and a positive reflection of God’s light on the world.

His granddaughter, Andrea, said that he showed her how to have fun.  He was always singing songs to make her laugh and loved to eat ice cream with her.  John has also adopted many children and grandchildren over the years, earning himself the name “Big John” as chaperone for Saddle Tramps Dances where he “knew all,” but “didn’t tell all.”  Many of the young men have said he was their hero.  He also chaperoned for the Cheyenne East High School marching band trip to Calgary, Canada (which came about due to his own initiative).  The kids just loved him.

Always being active in the community and with three children, John was always doing something.  While the children were growing up he managed the athletics team of the Cheyenne Junior League for several years, and continued on to serve as manager/coach of the Henry’s team in the Cheyenne Junior Babe Ruth League.  He started, and was president of, the first East High Band Parents Club.  He was president of the Cheyenne Saddle Tramps, cub master for Cub Scout Pack #124 Buffalo Ridge, and president of the Buffalo Ridge P.T.A.

Even as the children married and moved away, John stayed active in the community.  He became a Past Master of Cheyenne Masonic Lodge No 1, a 32nd Degree Scottish Right Mason and a member of the Shrine.  John held several masonic offices during this time.  He was Colonel (president) of the Frontiersmen and served as Adjutant of the Frontiersmen for several years. Inspired with a love for rodeo, he was appointed Racing Secretary and Assistant Committeeman for the Cheyenne Frontier Days (CFD), and in 1979 became a CFD Heels member.  John was also a lifetime member of the VFW Post #1881 and American Legion Post #6.

In his final days, he was treated compassionately by nurse, Desiree Martinez and Gen E. Cotherman of Frontier Home Health and Hospice.

And in conclusion, and on behalf of the entire “Hayes” family, I (we) would like to extend my (our) heartfelt thanks and appreciation to all of those in attendance here today.  God bless, and may He keep you all safe and well.

A Rose Croix service will be held on Saturday, July 25, 2020 at 1:00 p.m. at the Cheyenne Masonic Temple.  Cremation is under the care of Schrader, Aragon and Jacoby Funeral Home.

In lieu of flowers, donations in "Big John's" memory may be made to the Shriner's Children's Hospital.

To order memorial trees or send flowers to the family in memory of John Hayes, please visit our flower store.