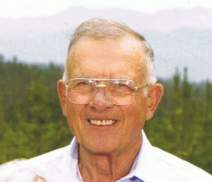 Larry Joseph Krysl, age 88 of Cheyenne, Wyoming passed from this life on Sunday, January 23, 2022.  The youngest of three children, Larry was born on the family farm south of Stuart, NE on October 19, 1933 to John and Catherine (Jansen) Krysl.  He is preceded in death by his parents, his sister Eileen, and his brother Ray.  He is survived by his wife Rose, his children Terry, Marilyn (Dave Hennings), Owen (Lezlie), Loran (Beth), Alan (Renee), Carolyn (Scott Hutchinson), and Jerry (Mary Beth).  He is also survived by 15 grandchildren and 13 great-grandchildren.

Larry grew up on the family farm, attended rural school District 183 south of Stuart through the 8th grade, and in 1951 graduated from St. Mary’s Catholic High School in O’Neill, NE.  While attending the Nebraska State Teachers College in Wayne, NE, he met Rose.  In 1954 he was drafted into the U.S. Army.  The couple were married at Sacred Heart Catholic Church in Cornlea, NE on August 9, 1955 and were married for 66 years.

While in the Army, Larry served in Fort Richardson, AK, near Anchorage.  After his service in the Army, Larry attended the University of Wyoming, receiving a Master’s in Education.  The couple moved to Rawlins, Wyoming where they raised their family and where Larry taught history classes at Rawlins High School and also served as Assistant Principal in later years there.  He served as an officer in the local Classroom Teachers Association.  To support his children’s elementary education at St. Joseph’s Catholic School, for 13 years Larry also worked at the Sinclair Refinery River Pump Station.  For many years he was a basketball referee, officiating everything from little league to high school to junior college games.  Upon retiring from his educational career, he took the skills he learned on the farm and in the summers with other teachers and provided painting services to the Rawlins and Sinclair communities for nearly a dozen years.

Outside of work, Larry’s life was centered around church and family.  He was active in the Knights of Columbus for over 70 years.  He took pride in the development and growth of his children and strived to provide them outlets for healthy recreation, including many fishing trips and escaping to the family mountain cabin he built with friends and family.

In 2006, Larry and Rose relocated to Cheyenne to be closer to their children and grandchildren.  In late 2019 Larry was diagnosed with cancer and bravely underwent two years of treatments to enable him to extend life with Rose.

Larry will be missed by his beloved family and friends made in service to his community, country, and church.  The Krysl family will be present to receive friends and family on Thursday, January 27th from 6:30 PM until 7:00 PM with a Holy Rosary Recited at 7:00 p.m. at the Cathedral of St. Mary, 100 West 21st Street, Cheyenne, WY  82001. A Funeral Mass will be celebrated Friday, January 28th at 1:00 p.m. at the Cathedral of St. Mary, following Mass Larry will be laid to rest at Mount Olivet Catholic Cemetery in Cheyenne. Following burial, the family invites friends to join them for a reception at Hartmann Hall, located at 100 West 21st Street, Cheyenne, WY  82001.

In Lieu of flowers, memorial gifts may be made to St. Joseph’s Children’s Home in Torrington, WY (https://www.stjoseph-wy.org) or The Davis Hospice Center in Cheyenne, WY (307-633-7016).

The family would like to thank the caregivers at Cheyenne Regional Cancer Center, Pointe Frontier Retirement Community, and The Davis Hospice Center, for their loving, compassionate care.

“Eternal rest grant unto Larry, O Lord, and may perpetual light shine upon him, and all the souls of all the faithful departed, and may he Rest In Peace in God’s Mercy. Amen”

To order memorial trees or send flowers to the family in memory of Larry Krysl, please visit our flower store.