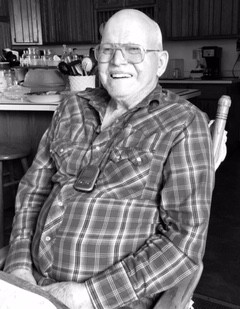 Lewis was born August 6, 1927 at home in Sonora, Texas weighing in at three pounds, a son of Elton and Ida “Merl” (Machen) Archie.  The family moved to the Guernsey area in 1933 purchasing his great uncle’s homestead near Meadowdale.  He attended country grade school and Sunrise High School, taking a bus from the Meadowdale Store where he stayed much of the time during the week.

As a young man Lewis worked on many ranches including the home place and the Bass Ranch in the Meadowdale area, the Newell Ranch near Lingle, WY were he “went to help out for 2 weeks and stayed five years”, and one winter at Snake River Ranch near Jackson, WY. He was a lifelong rancher with a heart for livestock, known for his expertise with cattle and training horses.

On September 18, 1955 he married Patricia Lee Daly.  They settled west of Glendo, purchasing a ranch on Horseshoe Creek in 1957 where they raised their family and fostered several children.  He survived many years of ranch life including the flood of 1965 when Lewis was washed around the barn in the flood waters.  They lost all but a few cows when the Newells showed up with four heifers and a bull enabling them to rebuild their herd.  They were married almost 49 years until Patty’s passing in 2004.

On March 12, 2005, he married Gwendolyn B. Hunsicker.  They split their time between Glendo and Apache Junction, AZ until her passing in 2018.

Lewis enjoyed visiting with friends and family.  He was always up for a game of cards and could best anyone at tossing horseshoes (especially if the stakes were to see who got to milk the cow). Later in life, Lewis picked up golfing and could often be seen on the greens of the Guernsey golf course.

He was preceded in death by an infant brother; his parents; brothers, Jim and Leonard Archie; in-laws, Dennis and Nancy Daly and Dale Hendrickson; niece, Shelly Hendrickson; and nephew, Joe Archie.

The family would appreciate memorials to the Glendo Volunteer Ambulance Fund or Davis Hospice Center in Cheyenne.  A memorial service will be held on the ranch at a later date.

To order memorial trees or send flowers to the family in memory of Lewis Archie, please visit our flower store.