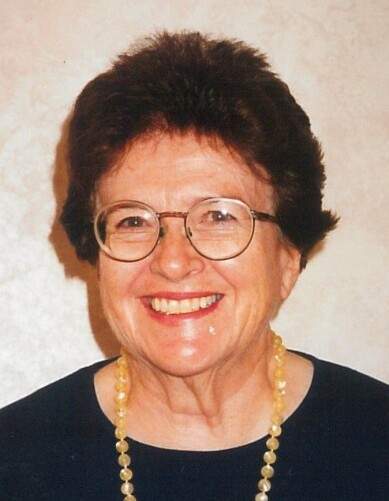 Margaret E. Smith, age 90, died peacefully in her home in Cheyenne on Saturday, September 12, 2020.  She had suffered no apparent illness.

Margaret Smith was born November 7, 1929 in Superior, Wyoming to Thomas P. and Rosalie (Young) Smith.  She was a coal miner’s daughter.  Margaret’s father was a supervisor in one of the four coal mines owned and operated by the Union Pacific Coal Company.  The Smith family lived in a modest home on Silk Stocking Row in Superior.  Margaret attended Superior schools at a time when the town’s population fluctuated from two to four thousand due to volatile demand for coal to operate Union Pacific train locomotives.  She was a good student and liked studying science and participating in sports and outdoor activities.  Margaret’s mother was the Home Economics teacher at Superior High School. To her dismay Margaret never learned to cook.

Margaret was active in Girl Scouts and was Captain of Superior’s 1942 Junior Girl Scout Team that won first place at the Union Pacific Coal Company’s annual Safety First contest in Wyoming, Utah, and Colorado.  First aid teams in Southwest Wyoming were trained year-round to be first responders in the event of a coal mine disaster.  In 1946, Margaret was Captain of the Superior Senior Girl Scout team that won first place in regional competition with other senior girl scout teams in advanced mine disaster first aid.

Following graduation from Superior High School in 1947, Margaret enrolled as a student at the University of Wyoming in Laramie pursuing a degree in medical technology.  While at UW she was an active member of Chi Omega Sorority.  She completed her senior year as a medical technologist intern in the laboratory at Laramie County Memorial Hospital in Cheyenne, earning her BS degree from UW in 1951.

Following graduation, Margaret began working full time as a medical technologist in the lab at the Cheyenne Hospital.  Soon thereafter she took a job with Clinical Labs, a private pathology lab owned by Dr. Sam Zuckerman and Dr. Marjorie Andresen.  Margaret spent her entire 45 year career as a medical technologist with Clinical Labs.  During her career she worked with seven pathologists and more than thirty laboratory technologists.  Margaret excelled at her profession becoming lab supervisor, chief technologist and was Administrative Director of the laboratory at retirement in 1996.

Throughout her life Margaret enjoyed traveling with her brother, studying Wyoming history, and playing tennis and golf.  She was active in water exercise.  She also enjoyed her pet dogs, going to dinner theaters, dining out, and getting her hair done every Friday.  She was a member of the Wyoming State Historical Society, the Wyoming State Society for Medical Technology, and was a life member of the UW Alumni Association.  She was an annual contributor to the University of Wyoming Foundation for decades.

Margaret found happiness in whatever she was doing.  She will be remembered for her dedication to her career, her active lifestyle, her generosity to organizations and friends, her predictably cheerful and engaging personality, and her beautiful smile.

She was preceded in death by her parents and her brother, Thomas J. Smith, who was her life’s best friend and primary companion.  She is survived by a cousin, Patricia (Kelly) Greenlee of Rock Springs, Wyoming, and other extended family in the Rock Springs area as well as many good friends in Cheyenne.

Private burial services will be held at the Rock Springs Cemetery.

To order memorial trees or send flowers to the family in memory of Margaret Smith, please visit our flower store.