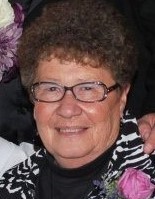 On December 28, 1955, she married Harold Dean Haden.  They lived in Bridgeport until 1992 when they moved to Cheyenne.  She worked at Cheyenne Regional Medical Center in Human Resources and Administration until her retirement.  Her many interests included playing the piano, knitting and painting.

Marlys was preceded in death by her parents; her brother, Adrian; and her husband, Dean.

Marlys is survived by her brother, Stan (Becky) Goltl of Bridgeport; sister-in-law, Helen of Lincoln, NE;  and sons, Jay (Cindy) Haden of Lincoln, NE, Jim (Carie) Haden of Sioux City, IA, and Jereme Haden of Raleigh, NC.  She also loved her grandchildren, Joshua Haden, Hillary and Joel Haden, Jessilyn Haden, and Lauren Groeneweg, and she was blessed with five great-grandchildren.

A funeral service will be held on Friday, October 2, 2020 at 2:00 p.m. at North Christian Church in Cheyenne with interment to follow in Beth El Cemetery.  Face coverings are required to attend the service.

To order memorial trees or send flowers to the family in memory of Marlys Haden, please visit our flower store.