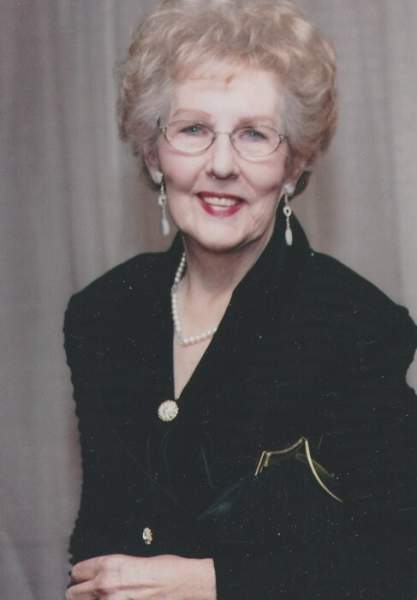 She was born September 30, 1934 to Carl and Frieda Haeker on her family’s farm about 10 miles outside of Alma, Nebraska.

Marvel attended a one-room schoolhouse and later high school in Alma, graduating at age 16 as class valedictorian. She was awarded a scholarship to a two-year business college in northern Nebraska which she attended before taking an office job in Chicago.

She later worked in the Denver office of stock brokerage firm Merrill Lynch, Pierce, Fenner & Beane. She knew and often talked to Charles Merrill, who in 1915 had co-founded Merrill Lynch & Co., and described him as “a real gentleman.” In the late 1950s Marvel was the first woman in Colorado to take the stockbroker’s exam and become a stock trader.

Marvel later came to Cheyenne and worked for KFBC Radio and Television, where she met her future husband, William D. McCraken. She and Bill were married for more than 40 years until his death in 2002.

She was also preceded in death by her parents; her dearest friend, Joann Sigler and her brother-in-law and sister-in-law, Robert and Anne McCraken, of Cheyenne.

Marvel was a member of the Cheyenne Chapter of the Questers Club, an organization dedicated to learning about and preserving antiques and historic artifacts and sites. She traveled to several cities to attend large conventions on antiques and gave presentations on carnival glass and women’s purses and  antique household tools dating back to 1800.

Marvel was an active member of the Women’s Civic League of Cheyenne and in 1969 hosted the first Christmas House, which became a highly successful fundraiser benefiting the former DePaul Hospital.

Marvel took special pride in hosting the inaugural event at her family’s home on Forest Drive as she had designed the layout of the house before it was built. She also served as president of Civic League in 1983-84.

Marvel was also a longtime member of Cheyenne P.E.O. - Chapter S.  She was active in many other charitable groups and fundraisers as well.

She was known for having a sound mind for business, investing and financial matters and was a valued member of the corporate boards of directors when the McCraken Family and other partners owned the newspapers in Cheyenne, Laramie, Rawlins, Rock Springs and Worland.

Marvel was a strong Christian woman whose faith was very important to her.

She was a devoted and loving daughter, sister, wife and mother and was known for her kindness, caring and love of people. She enjoyed entertaining, traveling with friends and family and playing bridge.

She is also survived by nephews, Tim (Margaret) Streff of Omaha, Nebraska, Rick (Dianne) Calkins of Alma, Steve (Betty) Streff of Kearney, Nebraska, and Mike (Janice) McCraken and their son, Rob, of Cheyenne; and nieces, Raetha (John) Nelson of Alma and Cindy (Joe) Marek of Cheyenne.

The family would like to express its appreciation to the doctors, nurses and caregivers who helped care for Marvel in her final years.

Cremation has taken place. A funeral will be held at 9:30 a.m. on Saturday, September 4 at Schrader, Aragon & Jacoby Funeral Home, to be followed by interment at Beth El Cemetery.

After the service, friends are invited to celebrate Marvel’s life with fellowship, food and refreshments beginning at 10:30 a.m. at Little America Hotel and Resort in Cheyenne.

Memorial donations may be made to the Cheyenne Animal Shelter or the Salvation Army.

To order memorial trees or send flowers to the family in memory of Marvel McCraken, please visit our flower store.