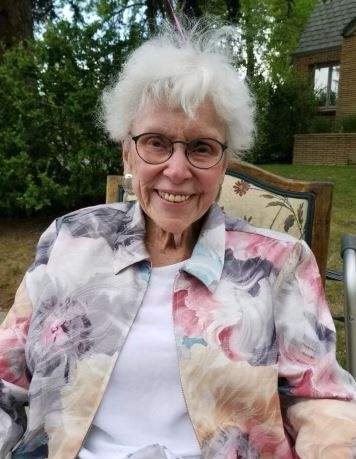 Mary Ryan Ostlund loved life, nursing, duty, faith, family, community, good habits, creativity, beauty, Mother Nature, and a good cause. At a young age, she decided she wanted an adventurous life and indeed she had one.

Born to Tom and Peg Ryan on May 29, 1928, in Mount Vernon, New York, she grew up in the hard times of the Depression and the ominous, patriotic environment of world war.

She wanted to be a nurse at age 12. The same month she graduated from A.B. Davis High School in 1945, she began her nursing education in the big city at St. Vincent’s Hospital of Nursing run by the Sisters of Charity in Greenwich Village.  Three years later, her graduation was held at St. Patrick’s Cathedral in Manhattan. The St. Vincent’s motto, ‘Patientia, Fortitudo Et Perseverantia’ became the foundation for her life.

Immediately after graduation, she wanted to join the United States Navy and see the world but she wasn’t old enough. As soon as she turned 21, Mary took a train to the Navy Department in lower Manhattan and enlisted to become a Navy nurse. In 1949, The President of the United States by proclamation reposed “Trust and Confidence in the Patriotism, Valor, Fidelity and Abilities” of Mary Virginia Ryan and appointed her Ensign (Nurse Corps) in the Naval Reserve of the United States. She later met that President, Harry Truman, when he toured her hospital ward.

While stationed at St. Albans Naval Hospital, she cared for very young Army Korean War veterans with amputations, broken bones, head injuries and other problems. This had a lasting impact on equally young Mary. At the hospital, she also met Ensign John C. Ostlund, a recent Annapolis graduate from Gillette, Wyoming diagnosed with insulin-dependent diabetes.

In 1952, they were married and she was off to a huge adventure and married life in the Wild West. At the time, Gillette had 1.5 paved streets and a brand new first traffic light. The two hospitals located in large houses, each with five beds, were already staffed. They had no need for a St. Vincent’s trained nurse. The polio outbreak changed all that and she was asked to be the first-ever school nurse in the community.

Mary’s first child was born in 1953 with seven more to follow over the next 10 years. In addition to raising a family, John and Mary spent 30 years involved in many business, community, State, and political endeavors. While Mary never worked as a paid nurse again, her large family provided many opportunities to utilize her skills. Gillette boomed in those years and the Ostlunds were integral to that growth and development.

In 1971, the Ostlunds became owners of the historic Remount Ranch west of Cheyenne. This solidified Mary’s love of nature and the Wyoming landscape. The ranch was a vacation home for family and a place to entertain involvements with the UW Board of Trustees and the Wyoming Legislature. Mary’s interest in birdwatching was enhanced at Remount and she loved researching the extraordinary ranch history where Mary O’Hara wrote “My Friend Flicka”.

In 1976, Mary shook the hand of another president when she and John were guests at the White House for a State Dinner under President Gerald Ford.  Mary subsequently shook the hand of Ford’s successor, President Ronald Reagan. In 1978, adventurous Mary enjoyed meeting people all over Wyoming when John ran for the Republican nomination for Governor, running unsuccessfully against Ed Herschler. Fulfilling her goal of seeing the world, Mary traveled extensively with John including a trip to South Africa.

In 1984, John and Mary left Gillette and retired to the Remount. Shortly thereafter, John lost his eyesight due to complications of diabetes and Mary’s role changed in a big way. She became John’s driver, reader, coat and tie selector, among many duties. Together, they handled their situation with aplomb and continued to share their Remount home with public and private entities, entertaining the likes of Admiral James Watkins, Disney’s Michael Eisner, and author James Michener. Their summer ice cream socials were fun. Best of all were the numerous opportunities to enjoy and influence their grandchildren, Jason, Jordan, Michael John, Chad, P.J., Andrew and Megan. Mary instilled in every one of them a love of watching hawks, eagles, blue heron, and mountain bluebirds, the thrill of catching a glimpse of deer or mountain lion, the excitement of a thunderous lightning storm, and the importance of picking up litter whenever it was sighted.

In 1994, John and Mary sold Remount and moved to a house in Cheyenne where they continued to enjoy friends, involved themselves in the community, and spent time with grandchildren.

In 1998, Mary again met a president when U.S. Senator Enzi appointed her to represent Wyoming on the Friends of Art and Preservation in Embassies Millennium Committee. She attended a White House reception hosted by President and First Lady Clinton.

John passed away in 2004. Mary continued to do the things she loved including Blue Stockings, St. Anthony’s Circle, Cheyenne Audubon, Cheyenne Historical Society, Cheyenne Symphony, and attending charitable events for the hospital, library, and Old West Museum. She enjoyed giving a presentation on the history of Remount Ranch to a packed room for a Cowgirls of the West luncheon. In 2016, Mary had the privilege and pleasure of helping to introduce the Wyoming Breast Cancer Initiative Resolution in the Wyoming Senate.

In her most recent years, she enjoyed reading two morning newspapers while drinking coffee and working crossword puzzles. She loved good mystery books. She made her bed every morning and wrote handwritten notes to family and friends and on occasion to the governor or Congressional delegation. She kept an extensive calendar of family birthdays and anniversaries and made sure the supply of commemorative postage stamps was ample.

Trips to see art at the American Heritage where she had been a board member and to the Old West Museum where she had been a benefactor were a treat, as was going to the Remount to sit by the lake and watch for birds.  She was grateful to be able to live in the home she loved and maintain her independence. While she traveled the world with John, she had never seen Old Faithful. Her daughter, Peg, took her to Yellowstone in the Fall of 2019 at 91. While 2020 was a challenge but memorable for Mary, she still enjoyed a curbside birthday party attended by 80 people including Governor and First Lady Gordon. And yes, she was able to make her tradition of Christmas Midnight Mass one last time.

Mary had two good causes she was hopeful to make happen. One, the return of Esther Hobart Morris to the front of the State Capitol and two, the removal of pesky turkey vultures from her lovely neighborhood trees. While the pandemic and illness interfered with her work, family members have been charged with seeing their fruition.

A Memorial Mass at St. Mary’s Cathedral to celebrate her amazing life will be held at a later date. Mary will be laid to rest next to John during a private family Mass and burial service at Mt. Pisgah Cemetery in Gillette.

Memorial contributions may be made to the Mary V. Ostlund Nursing Scholarship at LCCC.

To order memorial trees or send flowers to the family in memory of Mary Ostlund, please visit our flower store.