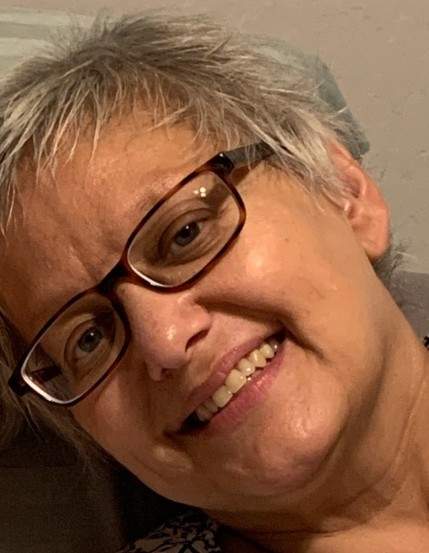 Mary "Berna/Bernie" Bernadetta Lovato, 54, of Cheyenne, Wyoming was born to Robert and Roma Lovato in Tacoma, Washington on Sunday, April 9, 1967, the 10th of 11 children. Having five older brothers and five sisters fostered her character as a charitable, dedicated, expressive, vivacious and zealous woman. Berna had an enthusiastic drive for all that she did, inspired by the lives of the Holy Saints and strove to surrender her will to the Will of God.

She was full of life. When Berna entered a room it was obvious, the atmosphere immediately brightened-up and the noise level increased several decibels with her gregarious, joyful laughter as she gave her full and undivided attention everyone in the room.

As a young girl she enjoyed Brownie Scouts and Girls Scouts especially because the skills she learned were taught by her favorite scout leader – her mother. She loved playing with her baby dolls tenderly bottle feeding, rocking and singing to them. Berna’s spirited quality showed itself when helping to build marathon-type obstacle courses in the yard with her brother, John and sisters, Robin and Ana, running non-stop around the block, riding bicycles, roller skating, or playing Barbie and GI Joe with Ana (including renaming the GI Joe’s with her brothers’ names and having marriage ceremonies for the dolls). Once while riding on the back of John’s tricycle and holding on tight, he was Bronson and Berna declared she was Pretty Bronson from the television series "Then Came Bronson".

Berna’s athletic abilities lead her to play on the junior high school's soccer team. Driven to learn, she knew the technical and crucial skills of soccer before the first match. Thriving on the strenuous activity, friendships with teammates, and her love for the game, she excelled in the sport. Determined to exceed, her own goals and limitations only increased in her a deeper love of life and dedication to all that mattered including her long friendship with Linda Hvezda Spero of Meridian, Idaho who she pondered teenage details of her first junior high school dance with. Over the years they have shared many family stories, faith conversations, giggles and joy.

High school held favorite memories for Berna. Upper classmates loved her and called her Bernie. She was a favorite amongst her peers. Her outgoing personality was perfect for the Drill Team that performed at high school football and basketball games and at the Rose Bowl Festival Parade in California. Little did she know her outward zeal for life would erupt from within herself for love of neighbor and the whole World.

Raised Roman Catholic but not fully aware of or committed to the doctrines of faith, Berna at 21 discovered the Sacred Heart Prayer Group at the Cathedral of Saint Mary. All that Berna had experienced and had become up to this point drew her into a profoundly deep relationship with Jesus Christ. She developed, fortified and lived her Roman Catholic convictions, loved much, and always with a generous heart gave her time, talent, and treasures willingly. Berna was a devoted friend, faithful sidekick, "Girl Friday", and right-hand confidant to Susan Aldana of the Sacred Heart Prayer Group.  With the group, Berna was active in the community and statewide with various ministries. When asked if she could help with a project or certain need, Berna never said no.  She made time to help where and when needed even if she didn’t feel like it. Multitalented she made banners, posters, skit props, helped Susan decorate the Cathedral for the Christmas season and designing an interactive Bethlehem. Berna was welcoming to others at seminars, provided refreshments as the Refreshment Ministry go to, played the tambourine with the Music Ministry, was highly engaged with the Adoration and Healing Ministries, and aided Susan with the Catechism Ministry for mentally handicapped students. She was faithful to the Pro-Life march. Not holding back, Berna was involved with Susan in cleaning the “facilities” during Cheyenne Frontier Days as penance and sacrifice for the sins of the world and to raise money for persons in the community with financial need. A 33-year member of the Sacred Heart, the list goes on and on of her involvement at Saint Mary's Cathedral and with the Sacred Heart Prayer Group. Her faith came alive and a beautiful transformation took place.

Employed at Laramie County School District #1 for nearly 31 years, Bernie was energized by love and compassion for the PALS students she served, the computer classes she taught, and all those at the administration building she was close with. Bernie put her artistic talents to work here as well making posters, banners, flyers and tending the administrative needs of the Special Services Division.

At family reunions Berna provided uniquely fun entertainment whether it was songs performed with white gloves and a black light and signing in American sign language or dancing to the beat of Elvis Presley and the News Boys. She performed skits and involved as many nieces and nephews as possible. We didn’t have to hire entertainment, we had Berna. She was not an onlooker, but active and alive. She was a seamstress, an upholsterer and mixed media artist, a gardener, handy with power tools, restored old furniture, and best friend.

Our beloved Berna struggled with cancer and the effect of treatments on and off for 14 years and the setback of getting Covid. Her friend and sister in Christ, Mary Shirk, wholeheartedly took Berna to appointments and treatments. Berna has competed well and has finished the race; she has kept the Faith (2 Timothy 4:7-8). Berna won her place in the kingdom of Heaven on Wednesday, August 11, 2021.  She is preceded by her father, Robert Lovato; brothers, Otto and Ernie Lovato; and sister, Mary Robin Romero.  She is survived by her mother, Roma Lovato of Cheyenne; brothers, Anthony (Paula) of Phoenix, Arizona, Michael (Linda) of Laramie, Wyoming and John (Denine) of Chandler, Arizona; sisters, Mary Judene Lovato of Portland, Oregon, Mary Roma Audiss of Rapid City, South Dakota, Mary Aurmelia Decker of Cheyenne and Mary Anjelica “Ana” Lovato of Carlsbad, New Mexico; 29 nieces and nephews; 26 great-nieces and nephews; and four great-great-nieces and nephews; Godchildren; brothers and sisters in Christ; and countless friends.

Recitation of the Rosary will be held on Friday, August 20, 2021 at 9:30 a.m. at St. Mary's Cathedral with a Funeral Liturgy to follow at 10:30 a.m.  An interment service will be conducted in Olivet Cemetery.

To order memorial trees or send flowers to the family in memory of Mary "Berna/Bernie" Lovato, please visit our flower store.