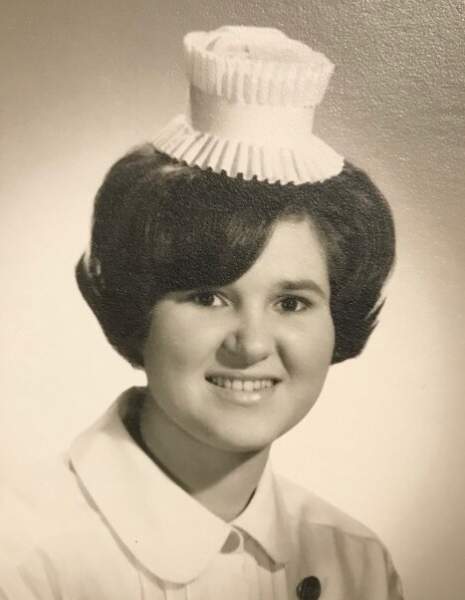 Pat was born October 28, 1948 in St. Joseph’s Hospital in Highland, Illinois, a daughter of the late Dana J. and Elizabeth Theresa (Gantner) Maerz.

She attended St. Paul’s Elementary School, Highland Junior High and graduated from Highland High School.  After high school, she attended Miami Valley Hospital School of Nursing in Dayton, Ohio where she graduated in 1970.

During her 48 year registered nursing career, she spent most of her first 20 years in Idaho Falls, Idaho where she expanded her career as a trauma nurse spending many years in the Emergency Department at Sacred Heart Hospital which later became Parkview Hospital.  She also worked in Ohio, Montana, Oregon, Utah and Wyoming.  Ten of those years we spent in civil service with the Navy in Idaho Falls, the Air Force in Washington State, the United States Air Force Academy in Colorado Springs, Colorado, the Army in Missouri and Tennessee, and at Fort Carson where she retired.

She adored her horses, Rascal and Cajun, and her dogs and cat.

She is preceded in death by her parents; husband and love of her life for more than 25 years, Jack Patton; and sister, Mary Catherine (Curtis) Messerli.

A memorial service will be celebrated on Friday, August 28, 2021 at 10:00 a.m. with interment to follow at 11:00 a.m. at the Cheyenne National Cemetery. Cremation is under the care of Schrader, Aragon and Jacoby Funeral Home.

Expressions of sympathy in Pat’s memory may be made to the Cheyenne Animal Shelter.

To order memorial trees or send flowers to the family in memory of Patricia Patton, please visit our flower store.