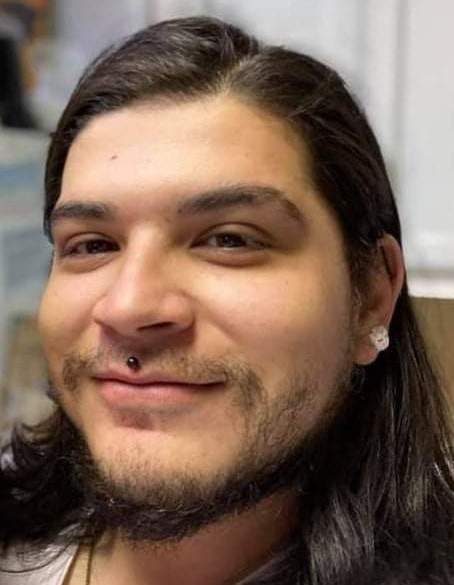 Raymon Anthony “Tony” Cruz moved into the next plane of his existence on Friday, December 11, 2021 in Tallahassee, Florida where he and his family relocated in June.

Tony was born May 6, 1995 to Philip Cruz and Jennifer Marshall in Cheyenne, Wyoming. At 26 years old, he is survived by his grandmother, Jo Goddard-Shive (Fran); his parents; his brother, Eddie (Rikki) and their two daughters, Ember and Savvy Cruz; his sister, Sierra Cruz and her two daughters, Adeleena Frauendienst-Cruz, Cambria Benintende-Cruz, and her son, Damian Hoover-Cruz; the mother of his children, Abbigale Klindworth; his daughter, Averri; and his two sons, Cosmo and Celestino Cruz; along with many, aunts, uncles, and cousins.

He was preceded in death by his grandparents, Philip and Dora Cruz, and John Daniel (Dan) Goddard.

Tony enjoyed many hobbies such as spinning poi, braiding hemp, building all the things, and he had so much natural talent. He had especially enjoyed shooting pool since he was eight years old earning many trophies and serving on the Board of Directors for the Cheyenne Valley Pool League from 2017-2018.

He had many different occupations including delivery driver for five years for the Golden House Chinese Restaurant in Cheyenne, but had recently found his passion as an arborist and tree climber in Cheyenne with Magrum Tree Service and with AAA Tree Service in Tallahassee.

Tony loved all of his family and often went out of his way to spend quality time with as many of them as he could including accomplishing many projects with his dad. He loved being an uncle and adored being a father. The next generation was definitely a priority to him. As parents, Philip and Jennifer were very proud of the person he was growing into. If he ever loved you, you knew it because he loved fiercely. He will be missed terribly by almost everyone whose life he touched. We hope that he inspired you as well, as he had grown into a beacon of light in a sometimes-dark world.

Tony has been cremated by Schrader, Aragon and Jacoby Funeral Home and a memorial/celebration of his too short life will be held and announced at a later date in the new year. Please, no flowers.

If you choose to help support his children and their future, an account has been established at Meridian Trust FCU, Attn: Raymon "Tony" Cruz, c/o Jennifer Marshall and Philip Cruz, P.O. Box 548, Cheyenne, Wyoming 82003. Phone # 800-726-5644

Cards and condolences may be sent to Philip Cruz and Jennifer Marshall, 815 Randall Avenue, Cheyenne, Wyoming 82001.

May you rest in peace our Little Ray of "Sonshine"

To order memorial trees or send flowers to the family in memory of Raymon Cruz, please visit our flower store.