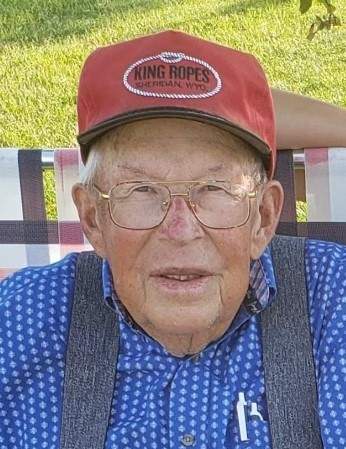 Richard R. “Dick” Drake, of Cheyenne, Wyoming passed away peacefully at the age of 85, on July 14, 2021, at Cottonwood Creek Memory Care in Cheyenne.  He was a much-loved husband, father, granddad, brother and friend.

Dick was born on April 26, 1936 at Arapahoe, Wyoming, the son of Joe F. and Ethel P. Drake.  His early years were all about family and raising all kinds of animals, and he went on to become active in 4-H and FFA and showing champions at the county and state fair.

Dick graduated from Riverton High School and then attended and graduated from the University of Wyoming in 1958.  While at UW, Dick met Myra Louise “Lou” Holmes, and on October 26, 1958 they were married.  Dick and Myra Lou then moved to the family ranch, north of Cheyenne, and started their lives together in Myra Lou’s grandparents’ home that was originally built in 1925.  They welcomed three children, Jolene, Kent, and Joylyn.  Together they joined other family members; Myra Lou’s parents, Keith and Myra Holmes, and brother, Buck Holmes, raising cattle and later formed the registered Hereford cattle business, “Holmes Herefords, Inc.”.

Dick was a Wyoming rancher that had a tremendous passion and eye for producing the best Hereford cattle he could for himself and the ranch family.  He sold “Holmes Herefords” cattle all over the world.

Dick and Myra Lou were a true team on the ranch and were married for 41 years, until Myra Lou’s death in 2000.  Dick later remarried Patricia “Pat” Fox on June 15, 2002 and the family welcomed her to the ranch in Cheyenne.  They were married 19 years.

Dick served in the Wyoming Army National Guard.  He was a member of the Wyoming and American Hereford Associations, Wyoming Stock Growers, National Cattleman’s Beef Association, and served as President on the Laramie County Fair Board.

He was preceded in death by his parents; wife, Myra Lou; his infant daughter, Jolene; and a sister, Wanda Davidson.

The memorial service for Dick will be at King of Glory Lutheran Church, 8806 Yellowstone Road, Cheyenne, Wednesday, July 21, 2021 at 1:30 p.m.  An interment service will follow in Lakeview Cemetery.

To order memorial trees or send flowers to the family in memory of Richard Drake, please visit our flower store.