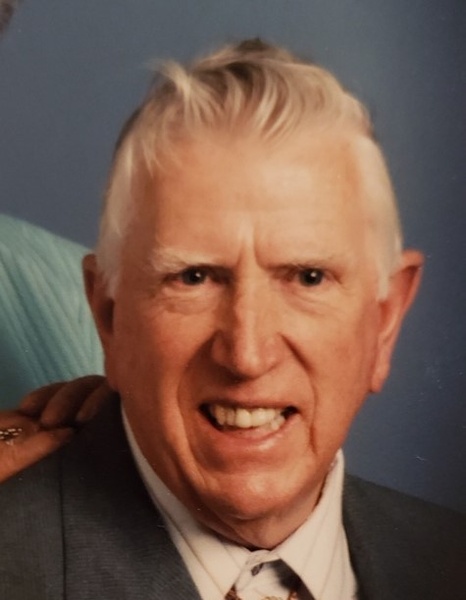 Art was born August 31, 1924 in Cheyenne, Wyoming where he lived nearly his entire life. He was the seventh child, the youngest of four sons, to Lester and Elsie Briggs. He was known to his family and childhood friends as “Art,” but to his work colleagues as “Bob.”

Art graduated from Cheyenne High School in 1943. He was one of three of his eight siblings to graduate from high school and the only male of the three graduates.  While attending Cheyenne High School, Art was a member of the ROTC for two years. Art said the parade grounds was where Storey Gym was later built.

Art was drafted to serve in World War II during the last of June in 1943 and was sworn in at F.E.Warren AFB. He reported to Denver on July 13, 1943. He was trained as a truck mechanic and shipped to the South Pacific with the Army Air Corps Air Force Bomber Command. They called the squadron the Roaring 820. The insignia was a lion jumping through a ring of fire. He drove trucks transporting bombs without detonators to the planes to drop on the Japanese.

Upon returning to Cheyenne, he met and fell in love with Roberta Lou Day. They married in 1947 and started their life together.  He took advantage of the GI Bill and went to Denver to learn the refrigeration trade. Upon completion of his training, he returned to Cheyenne and went to work at F.E.Warren AFB in civil engineering as a HVAC mechanic. His career spanned 35 years. At 55 years old he retired and worked at his own business called Bob's Refrigeration. He closed his business and retired some twenty plus years later when macular degeneration in his right eye made it impossible for him to do what he loved to do.

Art bought five acres of land east of Cheyenne from his father. With no experience in construction, he spent five years planning and building, mostly with his wit and his own two hands, the house he and his family would live in for 63 years. It was his and Roberta’s proof that thrift, hard work, determination and perseverance are rewarded.

He was known for his quick-witted humor and puns. He encouraged all of his children and grandchildren in their pursuit of the arts, especially music, happily driving them to and from rehearsals, attending performances, and paying for lessons. He was always a highly independent person, seldom swayed by trend. Art was a man that believed in helping others, whether pulling a stranger out of a snowbank, building a stretcher for his sister, Dorothy, or giving a customer a price break during hard times. He was highly respected by the many business owners who depended on him for the maintenance and service of their refrigeration units. Robert Arthur Briggs was a man of honor, integrity, honesty and loyalty. He spent his life trying to make a better world than that which he was given, and to being a better man than the world expected from his generation.

A funeral service will be conducted on Monday, October 19, 2020 at 11:00 a.m. at the Lakeview Chapel at Schrader, Aragon and Jacoby Funeral Home.  An interment service will follow at Beth El Cemetery.

To order memorial trees or send flowers to the family in memory of Robert Briggs, please visit our flower store.