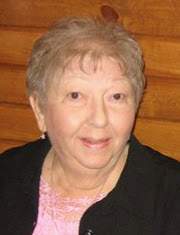 She was born September  20, 1935 in Hamilton, Ohio to Cono and Edith (Deligatto) Lattuga. She married Eugene Hacker in 1955 and was married for 17 years until his passing in 1971. In 1973 Shirley married William Lewis and they were together for 35 years until his passing in 2008.  Shirley graduated in 1953 from Notre Dame High School in Hamilton, Ohio, and she attended Hamilton Business College in 1954. Shirley worked for Ohio Casualty Insurance Company as an IBM Processor for over 40 years. Shirley devoted her life in service to others, playing gospel music, singing, playing piano, leading a choir, and many other charitable activities including a Christmas basket distribution she arranged annually. Shirley was also a member of American Legion Auxiliary.

No services at this time. Family will hold a celebration of life to be announced at a later date.

Cremation is under the care of Schrader, Aragon & Jacoby Funeral Home and Condolences may be offered at schradercares.com

To order memorial trees or send flowers to the family in memory of Shirley Lewis, please visit our flower store.