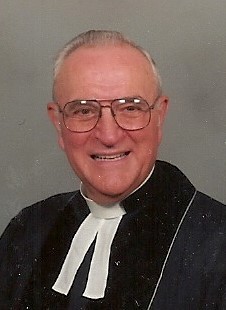 Bob will be remembered as a family man; a devoted husband, father, grandpa, great grandpa, son, brother, uncle and friend.  He will be known and remembered for the great love he demonstrated to all he served throughout his ministry.

Bob is a graduate of Redondo Union HS, Redondo Beach, California.  He received his BA from Phillips University in Enid, Oklahoma and his Masters and Doctorate in Theology, Divinity and Ministry from San Francisco Theological Seminary, San Anselmo, California.

While stationed at F.E. Warren AFB, Bob was a member of the Barbershop Quartet known at the Rip Chords. This quartet went on to win the Air Force International Barbershop Quartet Championships in 1953. He also researched streptococcal infections and received recognition by the Armed Forces Epidemiology Board.

He was very active in the communities that he served.  He was a member of Cheyenne Lodge #1, F.M. & A.M., Wyoming Consistory #1. He also served as past president of Goodwill Industries and past president of Southeast Wyoming Mental Health. He was a former member of the Cheyenne Chamber of Commerce Executive Committee, a member of the Model Cities Board, treasurer of United Way, and secretary of the LCCC organizing committee. Upon retirement he was recognized by the Senate of the State of New Jersey for his meritorious service and contributions to the religious community as well as receiving the Key to the City of Clifton, New Jersey. He was the chairman of the City of Clifton’s Professional Ethics Committee and worked with the Salvation Army of Passaic, N.J. He participated in numerous committees of the Presbytery of the Palisades and the Synod of the Northeast, the Protestant Chaplaincy Program in the regional hospitals, the Christian-Muslim Council, and was a three time delegate to the General Assembly. He was recognized as Clifton Masonic Lodge #203’s Citizen of the Year as well as Brother of the Year by the Men’s Brotherhood of Clifton, N.J. He was also recognized in the “Who’s Who in Religion,” by the Marquis Publication Board.

Bob is preceded in death by his loving wife, Lorna P. Walkley, his parents and sister Rose Mary.

A memorial service will be held on Saturday, November 21, 2020 at 10:00 a.m. at the First Presbyterian Church of Cheyenne.  The service will be available live-stream at www.schradercares.com as well as through the First Presbyterian Church website, www.firstprescheyenne.org. A reception will follow at the Schrader Reception Center.  Interment will be private at the Mountain View Memorial Park.  Cremation is under the care of Schrader, Aragon and Jacoby Funeral Home.

Condolences may be offered to the family on-line at www.schradercares.com or by e-mail at BobLornaWalkleymemories@gmail.com.

To order memorial trees or send flowers to the family in memory of The Reverend Dr. Robert Walkley, please visit our flower store.