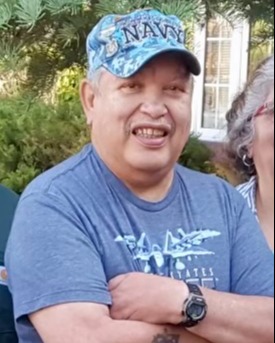 Timothy was born on February 25, 1947, in Cheyenne, Wyoming to Agnes (Montoya) Sandoval and Timoteo Sandoval.  He served his country in the United States Navy in the late 1960’s.  First, being stationed in Point Mugu, CA for boot camp and then Barbers Point, HI as a naval aviation firefighter.  He was a member of the American Legion.

He is a lifelong resident of Cheyenne where he met and married his wife, Theresa (Gallegos) Sandoval.   He spent most of adult life working for Asher Wyoming as delivery driver and APW Wyott as a senior machinist of food service equipment.  He enjoyed spending time with all his family including his wife, kids, brothers, and sisters, collecting coins, knives, gardening and telling his “old” stories.

In lieu of flowers, memorial contributions may be made to St. Joseph’s Food Pantry and to Davis Hospice Center.

To order memorial trees or send flowers to the family in memory of Timothy E. Sandoval, please visit our flower store.