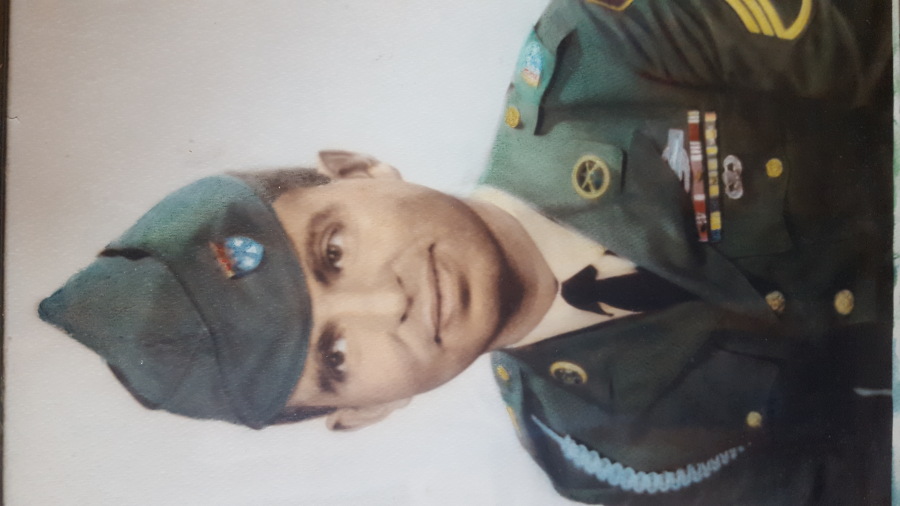 Vic was born on March 14, 1942 in Riverton Wyoming to Frank and Alice Medina. Vic was the 5th of 8 children. He was raised on a ranch in Meeteetse, Wyoming where he learned the art and pride of hard work.  In a family of 10, Vic learned to take and give orders which suited him well later in life. Vic attended Meeteetse Schools 1-12 and graduated from High School in 1960 with 10 classmates. His class picture captions stated, “It’s in the Dictionary? Well, that’s’ just one man’s opinion”.

Vic always knew where his future was going to take him; the United States Army.  Victor enlisted after graduation and set his goal to serve his Country for the next 20 years. Vic took his oath to uphold the Constitution to his grave.

Victor E. Medina served 3 combat tours in Vietnam where he was awarded the Silver Star, 4 Bronze Stars, 3 Purple Hearts and the Vietnam Cross of Gallantry with Palm for the job he willingly, gallantly and proudly performed with honor.

During his 1st tour in Vietnam in 1967, 1st Sergeant Medina was awarded the Silver Star for Heroism in connection with military operations against a hostile force and awarded the Bronze Star for Valor and Gallantry in action. The second Bronze Star was awarded for Service in a Hostile combat zone, and 3 purple hearts.

1st Sergeant Medina distinguished himself on October 25, 1967, in the Theater of the Republic of Vietnam, while on reconnaissance platoon, 2nd Battalion 12 Infantry on a combat operation in the Republic of Vietnam. When the lead track was hit by --- rocket fire, 1stSargeant Medina counted the men leaving the track and found one man was still left in the vehicle. He moved forward to help the man, exposing himself to intense hostile fire for one hundred and fifty meters in order to reach the carrier, he entered the blazing and exploding track and helped the casualty to safety. Still under fire and with complete disregard for his own safety he carried the injured man to a dust-off ship, saving the man’s life. Sergeant Medina’s personal bravery, aggressiveness, and devotion to duty were in keeping with the highest traditions of the military service and reflected credit upon himself, his unit, the 25th Infantry Division and the United States Army.

In 1969, during his 2nd tour of duty in Vietnam Victor was awarded for Merit, the 3rd Bronze Star for service in a Combat Zone and a 3rd Purple heart.

Victor retired from the United States Army in 1980.

After retirement from the military, Vic moved to Cheyenne, Wyoming and during the next 18years he acquired his Contractors licenses with Laramie County and the U.S. Air Force Base and proceeded to establish a successful Mobile Home transport service. After 1998 Vic and Kay were able to start out their retirement traveling and enjoying their friends and family.

Vic is survived by his lovely wife Kay; two step daughters; three grandchildren; and one great grandson.  He is also survived by two siblings E.G. (Chuck Medina) of Sheridan and Rita (Judy) M. Lewis of Cody, and numerous nieces and nephews.

He was preceded in death by his parents and six other siblings.

Military Interment services will be held on May 28, 2021 at 2:00 p.m. at the Cheyenne National Cemetery.

To order memorial trees or send flowers to the family in memory of Victor Medina, please visit our flower store.