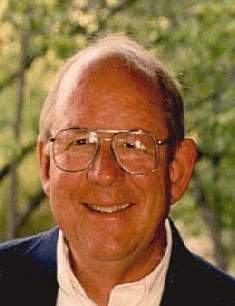 Wayne was born on May 2, 1942, in El Paso, Texas, the son of Earl and Cathryn Johnson and grew up in Las Vegas, Nevada.  After graduation Wayne enlisted in the U.S. Coast Guard.

Wayne spent 1961-1963 aboard the U.S. Coast Guard Cutter Matagorda (WAVP-373).  His ship patrolled the North Pacific Ocean.  After an honorable discharge, Wayne attended college and received a BS and two master’s degrees. During the summers he worked for the Targhee National Forest in Idaho fighting forest fires. While attending the University of Oklahoma, he met Patricia Froedge and asked her to marry him.  They married on June 15, 1973 in the First Presbyterian Church in Cheyenne.

After graduation from OU, Wayne was offered a job at the Wyoming State Library and moved to Cheyenne in 1973.  From 1978 to 1989, Wayne served as State Librarian.  He ran for political office and served in Wyoming House of Representatives from 1992 to 2004.  In 2004, Wayne ran for the Wyoming Senate and served for 12 years.

He was active in the Cheyenne community serving 38 years on various CFD committees.  He is Past Master of Cheyenne Lodge No. 1, A.F.&A.M. and is a member of several other Masonic organizations.  Wayne has been a member of American Legion Post #6 serving on the Honor Guard. He was a member of Kiwanis for many years working on Stars of Tomorrow and Junior Miss.  Currently he served as a member of the Rotary Club of Cheyenne meeting at noon.

He is survived by his wife and best friend, Patricia, as well as our beloved daughter Alexandra Noelle Johnson.  He was preceded in death by his daughter, Meredith Johnson; father, Earl Johnson; and mother, Cathryn Johnson.

Visitation will be held on Friday, October 23, 2020 from 3:00 p.m. to 5:00 p.m. at the Schrader, Aragon and Jacoby Funeral Home.  A funeral service will be conducted on Saturday, October 24th at 9:30 a.m. at the Lakeview Chapel at Schrader, Aragon and Jacoby Funeral Home. Interment will be held at Cheyenne Memorial Gardens and a reception to follow. Due to the pandemic, masks are required and social distancing encouraged. To attend the service virtually, please go to www.schradercares.com.

The family requests no flowers but those desiring to remember Wayne may donate to the charity of their choice.

To order memorial trees or send flowers to the family in memory of Wayne Johnson, please visit our flower store.